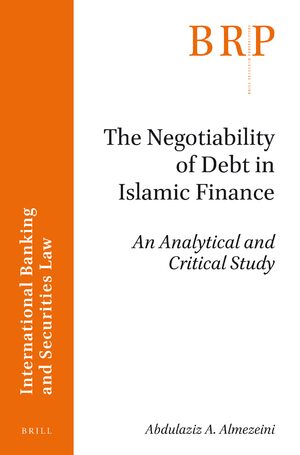 The Negotiability of Debt in Islamic Finance

An Analytical and Critical Study

Author: Abdulaziz Ahmed Almezeini
The challenges posed by the non-liquidity and non-diversity of the Islamic debts market make the market an inefficient tool on contributing to Muslim economic growth. Islamic scholars and experts created sukuk as an Islamic debt instrument to avoid riba (usury), but the sukuk market (especially in the Gulf) still struggles with the prohibition of the trade of debt due to the prohibition of the two Fiqh Academies.
Trading and securitizing debts should be permitted in Islamic law, with one condition, that the debt should be considered low risk. This new rule, the permissibility of trading debts, is supported by three Islamic legal bases, istishab, qiyas, and maslaha, which are recognized by all four Islamic schools of legal thought. Furthermore, permitting the trading of debts is more consistent with the principles and theories of Islamic law than is forbidding it. It is consistent with the obligations theory that debt is a personal right. It is consistent with the mal (property) theory that debt may be sold according to the three Islamic schools of legal thought, all of which consider debt as property. It is consistent with other modern Islamic financial transactions that are permitted by the two Fiqh Academies, such as tawarruq and murabaha.