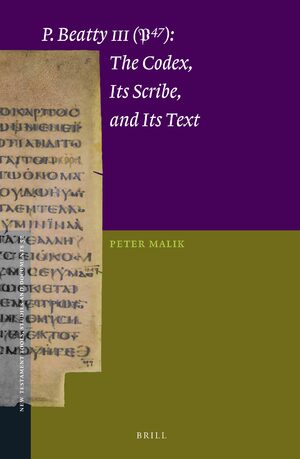 Author: Peter Malik
Since ancient works were preserved by means of handwritten copies, critical enquiry into their texts necessitates the study of such copies. In P.Beatty III (P47): The Codex, Its Scribe, and Its Text, Peter Malik focuses on the earliest extensive copy of the Book of Revelation. Integrating matters of palaeography, codicology, and scribal practice with textual analysis, Malik sheds new light on this largely neglected, yet crucially important, early Christian papyrus. Notable contributions include a new proposed date for P47, identification of several previously unreported scribal corrections, as well as the discovery of the manuscript’s close affinity with the Sahidic version. Significantly, Malik’s detailed, data-rich analyses are accompanied by a fresh transcription and, for the first time, high-resolution colour photographs of the manuscript.

€127.00$147.00
​
Add to Cart
Peter Malik, PhD (2016), University of Cambridge, is a Research Associate at the Institut für Septuaginta- und biblische Textforschung, Kirchliche Hochschule Wuppertal/Bethel, where he is part of an editorial team producing the Editio Critica Maior of Revelation. He has published on various issues pertaining to the text and manuscripts of the New Testament, especially the Book of Revelation.
Malik does a fine job in describing the codicological features of P47, and this will remain the standard treatment of that subject for many decades to come... overall this is a welcomed, well-executed and illuminating study.
Paul Foster, The Expository Times, 2017.

Malik’s work is careful and meticulously undertaken. He has therefore produced an indispensable survey of an important witness to Revelation that, surprisingly, has hitherto lacked a major investigation. Malik’s conclusions about scribal practice will not only be a valued reference and research tool but a stable and reliable model for comparable work on other manuscripts.
J.K. Elliot, Novum Testamentum, 2018.

Malik’s study shows that a careful physical inspection (and statistical analysis) of texts like P47 can “humanize” the scribe and help readers understand how many scribal errors originate with the difficult working conditions of copying texts by hand in the ancient world. This volume is a necessary addition for research libraries, and is highly recommended for NT textual criticism scholars.
Douglas Estes, Religious Studies Review, 2017

It is just the sort of thorough study that I hoped we will now see more of, one that addresses the manuscript as artifact, as well as analyzing its text… Malik has done an admirably thorough and careful job and his study should be noted and consulted on the textual transmission of Revelation, on copying habits and the physicality of ancient textual transmission, codicology of early papyri, and as a model for analogous future projects… Malik also devotes considerable and detailed attention to the text and the copyist who produced it, and his analysis now supersedes prior studies of the copyist of P47.
Larry Hurtado, 2018

The study is as exhaustive as one could imagine: the number of characters on each page is counted; the width of each margin, the size of the text block, and the height of each letter are measured to the millimetre; all abbreviations are listed; every correction is detailed and discussed—including some in scribendo copying adjustments not previously noted…. The present investigation relies on fresh high-resolution digital images, multiple visits to examine the manuscript, and the various databases now available to researchers. As such, it represents a model of what is currently possible in the study of a New Testament manuscript … This impressive volume is to be acclaimed as the definitive study of this manuscript, which may be read with profit by specialists in the multiple areas which it addresses.
H.A.G. Houghton, Journal of Theological Studies, 2018

Malik’s work will be the standard treatment of P47 for the foreseeable future. Malik recognizes that the manuscript and its scribe are important elements of textual criticism and makes a compelling case for personal autopsy alongside new technological methods… Malik’s close scrutiny of the codex has yielded a trove of data that would benefit all who are interested in the study of manuscripts.

Sean A. Adams, Journal for the Study of the New Testament, 2018

Malik's study makes an important contribution not only to our understanding of P47 and the text of the book of revelation, but also to textual criticism as a discipline. His interest in the material aspects of P47 is very much in keeping with recent textual scholarship. But his call to take into consideration affiliation with versions is well taken and, if heeded, should benefit the discipline.

Craig A. Evans, Bulletin for Biblical Research, 2019
Anyone interested in New Testament, textual criticism, papyrology, and manuscript studies in general. 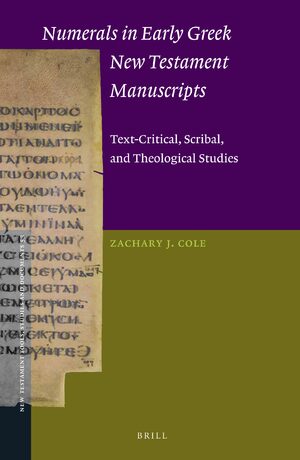 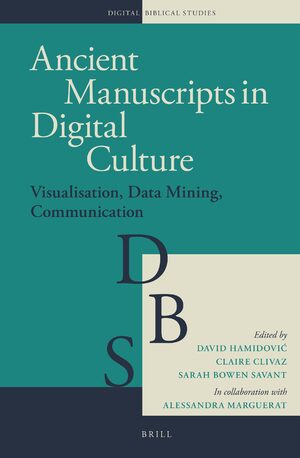 The Epistles for All Christians 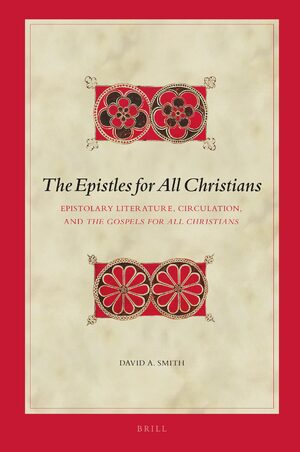