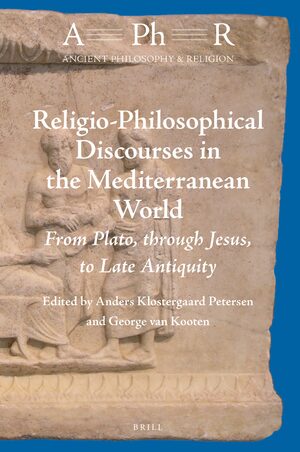 Religio-Philosophical Discourses in the Mediterranean World

From Plato, through Jesus, to Late Antiquity

Editors: Anders Klostergaard Petersen and George H. van Kooten
This first volume of the new Brill series “Ancient Philosophy & Religion” is a collection of articles by scholars of Classics, Ancient Philosophy, and Ancient Judaism and Early Christianity. The articles are based on papers presented at two colloquia on the interface between Ancient Philosophy and Religion at the universities of Aarhus and Cambridge. They focus extensively on Platonic philosophy and piety and sketch an emerging religio-philosophical discourse in ancient Judaism (both in the Sibylline Oracles and 4 Maccabees). Furthermore, this volume studies Seneca’s religio-philosophical understanding of 'consolation', compares early depictions of Jesus with those of ancient philosophers, and, finally, reconsiders responses of pagan philosophers to Christianity from the second century to Late Antiquity.
E-Book (PDF)

€154.00$177.00
​
Add to Cart
Anders Klostergaard Petersen (Gold medal Dissertation Aarhus, 1994) is Professor of the Study of Religion at Aarhus University. He has published extensively on early Christ-religion, late Second Temple Judaism, method and theory in the humanities and social sciences, and biocultural evolution.

George van Kooten (PhD Leiden, 2001) is Professor of New Testament & Early Christianity at the University of Groningen and a life member of Clare Hall, Cambridge. He has published widely on the Graeco-Roman setting of the New Testament, including monographs on Paul’s cosmology (Mohr, 2003) and anthropology (Mohr, 2008).

The scope signified by the title of this book is breathtakingly broad, but it actually does delineate the contents of the book reasonably well… A number of the essays are programmatic discussions of the conceptual puzzle posed by the books title, while others are close studies of particular texts. Among the latter kind, there is much more attention devoted to Platonism than to any other ancient philosophical school. But this is only the first volume in a series. It is a welcome contribution in its own right and gives us reason to look forward to more such. - Matthew V. Novenson, in: Journal for the study of the New Testament, 2018
The launch of this new series intended to foster research on the relationship between ‘Ancient Religion and Philosophy’ is only to be welcomed and applauded. And the volume to launch it opens up various ways to discuss the question. In fact, it poses more questions than it answers—and this is exactly what a volume opening a new scholarly series should do! - RAINER HIRSCH-LUIPOLD, Universität Bern, in: Journal of Theological Studies, 70.2 (2019)
Contents

4 Religion, Philosophy, and the Demons in Between
Lars Albinus

7 The Rapprochement of Religion and Philosophy in Ancient Consolation: Seneca, Paul, and Beyond
Christoph Jedan

9 The Last Days of Socrates and Christ
George van Kooten

13 Plotinus, Origenes, and Ammonius on the ‘King’
Harold Tarrant

14 Neo-Platonic Readings of Embodied Divine Presence: Iamblichus and Julian
Ilinca Tanaseanu-Döbler
All interested in the discourse between ancient philosophy and religion in Antiquity, both within, and between Greco-Roman culture, ancient Judaism, and early Christianity.