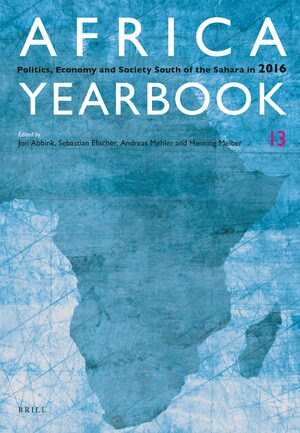 Politics, Economy and Society South of the Sahara in 2016

Editors: Jon Abbink, Sebastian Elischer, Andreas Mehler and Henning Melber
The Africa Yearbook covers major domestic political developments, the foreign policy and socio-economic trends in sub-Sahara Africa – all related to developments in one calendar year. The Yearbook contains articles on all sub-Saharan states, each of the four sub-regions (West, Central, Eastern, Southern Africa) focusing on major cross-border developments and sub-regional organizations as well as one article on continental developments and one on African-European relations. While the articles have thorough academic quality, the Yearbook is mainly oriented to the requirements of a large range of target groups: students, politicians, diplomats, administrators, journalists, teachers, practitioners in the field of development aid as well as business people.

€149.00$172.00
​
Add to Cart
Jon Abbink works as a senior researcher at the African Studies Centre, Leiden, and as a research professor at VU University, Amsterdam. His interests are political anthropology, ethno-history, and culture and religion in the Horn of Africa (Ethiopia, Somalia). Current research projects are on Ethiopian regional history and livelihoods, the rhetoric and practice of ‘development’, and religion and community formation in Northeast Africa.

Sebastian Elischer, Ph.D. (2010) in Comparative Politics, Jacobs University Bremen, is assistant professor of comparative politics at the University of Florida. He is the author of Political Parties and Ethnicity in Africa (Cambridge University Press, 2013). He has published on institutional change, identities and democratization in Africa.

Andreas Mehler, Ph.D. (1993) in Political Science, University of Hamburg, is Director of the Arnold Bergstraesser Institute and Professor of Political Science at the University of Freiburg. He has published extensively on democratisation processes and violent conflicts in West and Central Africa. With Henning Melber he is managing editor of Africa Spectrum.

Henning Melber, Ph.D. (1980) in Political Science, University of Bremen, is Director emeritus of the Dag Hammarskjöld Foundation and Senior Research Fellow of The Nordic Africa Institute in Uppsala, Sweden; Extraordinary Professor at the Department of Political Sciences, University of Pretoria, and the Centre for Africa Studies, University of the Free State. He has published extensively on Southern Africa and in particular Namibia. With Andreas Mehler he is managing editor of Africa Spectrum.


'Much has changed since my first reading of the Yearbook: the cooperating institutes, the writers, some of the editors. What remains the same is the quality of the articles, the depth of the analysis, the wealth of the factual information and the painstaking effort of the Yearbooks’ contributors to present life in Africa in all its diversity and perplexity'.