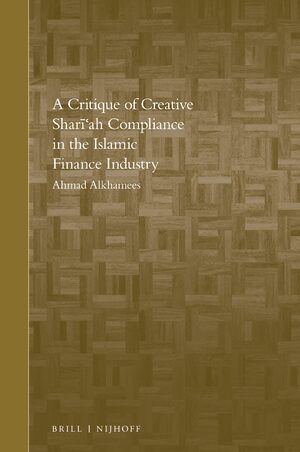 A Critique of Creative Shari'ah Compliance in the Islamic Finance Industry

€127.00$147.00
​
Add to Cart
Ahmad Alkhamees (Ph.D. (2014), University of Warwick), holds degrees in both Islamic law and English law. He is a published author on comparative law and Islamic law. He is a Co-founder of Harasani & Alkhamees Law Firm in Jeddah, Saudi Arabia, certified arbitrator, and a former judge in Riyadh’s General Court.
Acknowledgements
Brill’s Simple Arabic Transliteration System
Glossary of Arabic Terms
Table of Cases
List of Statutes
List of Figures and Tables
Abbreviations

2 The Form Versus Substance Debate and the Roots of Creative Shariʿah Compliance in Islamic Finance: Why Reinvent the Wheel?
2.1 Introduction
2.2 The Definition of Ḥīlah
2.3 The Origins and the Evolution of Ḥīlah
2.4 Positions on Ḥīlah of Islamic Schools of Thought
2.5 Refuting the Pro-Ḥīlah Arguments
2.6 Conclusion

3 Tawarruq as a Case Study of Creative Shariʿah Compliance
3.1 Introduction
3.2 Definition of Tawarruq and Selection Rationale
3.3 The Development of Tawarruq
3.4 The Differences between Jurisprudential and Organised Tawarruq
3.5 Forms of Tawarruq
3.6 Shariʿah Jurists’ Views on Tawarruq
3.7 Conclusion