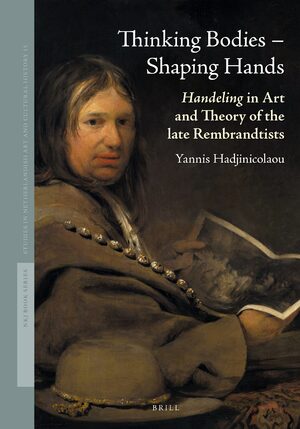 Handeling in Art and Theory of the Late Rembrandtists

Author: Yannis Hadjinicolaou
Thinking Bodies - Shaping Hands focuses on the critical as well as historical dimension of the handling of the brush and of the resulting appearance of colour on the painted surface in art and art theory from the middle of the 17th (above all from 1660) to the dawn of the 18th century in the Netherlands. More specifically, it deals with Rembrandt’s last pupils such as Arent de Gelder. „Handeling” describes an active, embodied process that is connected to the motion of the hand with the brush or with any other kind of tool. This term, up to now not sufficiently appreciated in scholarly literature, seems to be fruitful in this context. It is not so much connected with the term „style”, as with a prior step, which is equivalent to „manner”. At the same time, its meaning in Dutch till today is „action”. „Handeling” is an act that could be described as a „form-act”. It focuses on Formgestaltung, in which these actions themselves are understood as processes. Examining the „Rembrandtist ideology of painting”, this study attempts to reveal the embodied process of painting in the sense of a bodily articulation during the application of colour. This occurs within the productive tension between theory and practice.
E-Book (PDF)

€134.00$161.00
​
Add to Cart
Yannis Hadjinicolaou, Ph.D. (2014), Freie Universität Berlin, is a research associate at the international research project "Bilderfahrzeuge. Aby Warburg´s Legacy and the Future of Iconology", Warburg Haus (Institute of Art History, University of Hamburg). He has published three edited volumes and articles on art and art theory of the early modern period, the political iconography of falconry and the theory and history of art history as well as synagonism in the arts.
Acknowledgements
List of Figures
Foreword

All interested in art, cultural and visual history of the early modern period especially in the Netherlands.