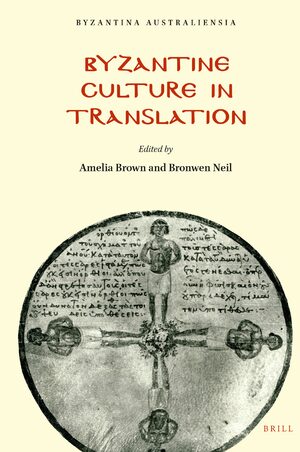 Series:  Byzantina Australiensia, Volume: 21
Editors: Amelia Robertson Brown and Bronwen Neil
This collection on Byzantine culture in translation, edited by Amelia Brown and Bronwen Neil, examines the practices and theories of translation inside the Byzantine empire and beyond its horizons to the east, north and west. The time span is from Late Antiquity to the present day. Translations studied include hagiography, history, philosophy, poetry, architecture and science, between Greek, Latin, Arabic and other languages. These chapters build upon presentations given at the 18th Biennial Conference of the Australian Association for Byzantine Studies, convened by the editors at the University of Queensland in Brisbane, Australia on 28-30 November 2014.

€129.00$149.00
​
Add to Cart
Amelia Brown, Ph.D. (UC Berkeley 2008), is senior lecturer in Classics and Ancient History at the University of Queensland in Australia. She works on Hellenic culture in Late Antiquity, and has published articles on Corinth, barbarians and Roman sculpture.

Bronwen Neil, Ph.D. (ACU 2000), FAHA, is Professor of Ancient History at Macquarie University. She has published widely on early Christianity and Late Antiquity, and co-edited a number of volumes including The Oxford Handbook of Maximus the Confessor (2015).

Each essay concludes with an extensive bibliography of primary and secondary sources, and all are informed by meticulous use of evidence and careful argumentation; texts cited in their original language include English translations. Seldom can an essay be categorized within a single discipline such as philology, social history, folklore, Quellenforschung, or material culture because the authors explore their subject matter for its significance in a range of medieval and modern contexts. - Elizabeth A. Fisher, George Washington University, in: Bryn Mawr Classical Review, 2018
Preface
Acknowledgements
List of Illustrations
Abbreviations
List of Contributors

General Index
All interested in Byzantine culture, history, literature, hagiography or reception, as well as the interactions and translations between Byzantine Greek and neighbouring Latin, Slavic, Turkish or Arabic-language cultures.