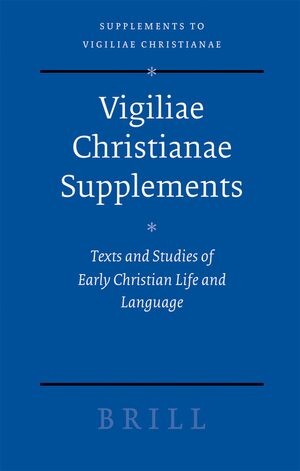 Women and Knowledge in Early Christianity

Editors: Ulla Tervahauta, Ivan Miroshnikov, Outi Lehtipuu and Ismo Dunderberg
Now available in Open Access thanks to the support of the University of Helsinki. Women and knowledge are interconnected in several ways in late ancient and early Christian discourses, not least because wisdom (Sophia) and spiritual knowledge (Gnosis) were frequently personified as female entities. Ancient texts deal with idealized women and use feminine imagery to describe the divine but they also debate women’s access to and capacity of gaining knowledge. Combining rhetorical analysis with social historical approaches, the contributions in this book cover a wide array of source materials, drawing special attention to the so-called Gnostic texts. The fourteen essays, written by prominent experts of ancient Christianity, are dedicated to Professor Antti Marjanen (University of Helsinki).
E-Book (PDF)

€127.00$147.00
Hardback
Add to Cart
About MyBook
Ulla Tervahauta Th.D. (2013), is Post-doctoral Researcher at the University of Helsinki. Her research interests include Nag Hammadi writings, and early Christianity in Egypt and Palestine. She has published A Story of the Soul’s Journey in the Nag Hammadi Library (Vandenhoeck & Ruprecht 2015).

Ivan Miroshnikov Ph.D. (2016) is Post-doctoral Researcher at the University of Helsinki and a Research Fellow at the Center of Egyptological Studies of the Russian Academy of Sciences. He works on Coptic literature and manuscripts, including the Nag Hammadi writings.

Outi Lehtipuu Th.D. (2004) is Academy Research Fellow and University Lecturer at the University of Helsinki. An expert on early Christianity, her most recent book is Debates over the Resurrection of the Dead: Constructing Early Christian Identity (Oxford University Press, 2015).

Ismo Dunderberg Th.D. (1994) is Dean and Professor of New Testament studies at the Faculty of Theology, University of Helsinki. He has published extensively on Johannine literature, early Christian gospels, Valentinian Christianity and Nag Hammadi writings, including Beyond Gnosticism (Columbia University Press, 2008).

Scholars of early Christianity, ancient history and philosophy and anyone interested in questions pertaining to how gender and the role of women were perceived in late Antiquity.