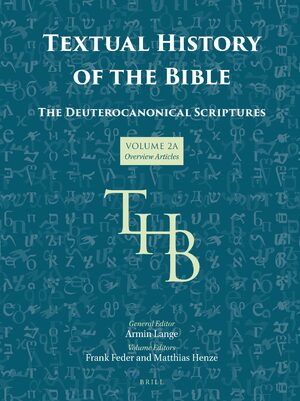 Textual History of the Bible Vol. 2A

Volume Editors: Frank Feder and Matthias Henze
Volume 2 of the Textual History of the Bible is devoted to the deuterocanonical books of the Old Testament, that is, to all books outside the Hebrew Bible that were considered canonical or 'useful for reading' by a church at some point. Earlier studies of the textual histories of these books focused largely on what were considered the most important textual witnesses, mostly in Greek, Latin and possibly in Armenian and Syriac, with the goal of recovering the 'original' text of the book in question. THB 2 breaks significant new ground in this regard. Rather than focusing on a small group of languages only, the goal has been to be exhaustive and to survey all known textual witnesses of all deuterocanonical books, paying particular attention to the manuscript traditions. Rather than viewing these language traditions merely as a way of reaching back to the alleged 'original' text, THB 2 takes language traditions seriously in its own right.

This new approach to the old texts requires the detailed knowledge of many experts, scholars with intimate knowledge of the language traditions and the manuscripts.

2A covers the canonical histories and the textual histories of the deuterocanonical texts in the diverse language traditions. 2B and 2C are devoted to the deuterocanonical books themselves. The chapters on each book begin with an overview article, titled 'Textual History of ...'. This introductory overview is followed by individual entries on each of the known language traditions in which the book is attested, roughly up to the tenth centry C.E.
Hardback