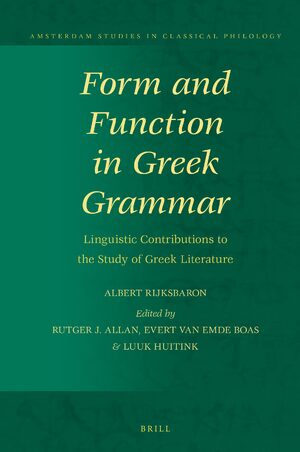 Form and Function in Greek Grammar

Linguistic Contributions to the Study of Greek Literature

Editors: Rutger J. Allan, Evert van Emde Boas and Luuk Huitink
Author: Albert Rijksbaron
Albert Rijksbaron is internationally known as one of the leading scholars of the Ancient Greek language, whose work has exerted a strong and lasting influence on the scholarly debate concerning many aspects of Greek linguistics. This volume brings together twenty of his papers, two of which have been translated into English and some which are not easily accessible elsewhere. The selection represents the full range of Rijksbaron’s research, including papers on central topics in Greek linguistics such as tense-aspect, mood, voice, particles, negation, the article, questions, discourse analysis, as well as on the views of ancient grammarians and modern commentators. As a whole, the volume shows how much linguistic analysis can contribute to our understanding of Greek literary texts.
E-Book

Rutger J. Allan, PhD Amsterdam 2002, is a Lecturer in Ancient Greek at the Free University Amsterdam. He is the author of The Middle Voice in Ancient Greek. A Study in Polysemy (2003) and co-editor of the volumes The Language of Literature (2007) and The Greek Future and its History (2017).

Evert van Emde Boas, DPhil Oxford 2011, is Leventis Research Fellow of Ancient Greek at Merton College, Oxford. He is the author of Language and Character in Euripides’ Electra (OUP 2017), lead author of the Cambridge Grammar of Classical Greek (CUP 2018), and co-editor of Characterization in Ancient Greek Literature (Brill 2018).

Luuk Huitink: DPhil University of Oxford 2012; postdoctoral researcher at Leiden University. co-author of Cambridge Grammar of Classical Greek (Cambridge 2018); author, with Tim Rood, of Xenophon. Anabasis III (Cambridge Greek and Latin Classics, Cambridge 2018); co-editor of Experience, Narrative and Literary Criticism in Ancient Greece (Oxford, in press).
"Readers will probably be most familiar with Rijksbaron’s work from his Syntax and Semantics of the Verb in Classical Greek and his linguistic commentary on Plato’s Ion, but there is also much to be gained from bundling together this greatest hits collection, as it brings out especially clearly the fruitfulness of the Functional Grammar approach. On a wide range of topics—particularly the tense and aspect system of the Greek verb and the discourse particles—time after time, Rijksbaron’s careful attention to the contextual circumstances that differ when two competing forms are used reveals previously unnoticed patterns that can help all classicists better understand the nuances conveyed by an imperfect in Hesiod, or an aorist imperative in Plato." Coulter H. George, Bryn Mawr Classical Review 2019.09.02
Acknowledgements Albert Rijksbaron—CV and Publications
Introduction
1 A Review of: H. Hettrich, Kontext und Aspekt in der altgriechischen Prosa Herodots
2 The Greek Perfect: Subject versus Object
3 The Discourse Function of the Imperfect
4 Sur les emplois de λέγε et εἰπέ chez Platon
5 On False Historic Presents in Sophocles (and Euripides)
6 ἀκροᾶσθαι or ἀκροάσασθαι (Plato, Ion 530d9)?
7 The Imperfect as the Tense of Substitutionary Perception
8 How Does a Messenger Begin His Speech? Some Observations on the Opening Lines of Euripidean Messenger Speeches
9 Discourse Cohesion in the Proem of Hesiod’s Theogony
10 On the Syntax and Pragmatics of inquit Formulae in Plato’s Narrated Dialogues
11 Sur quelques différences entre οὗτος ὁ + substantif, οὗτος δὲ ὁ + substantif, ὁ δὲ + substantif + οὗτος chez Hérodote
12 Sur les emplois des ἐάν et ἐπεάν (à propos d’ Euripide, Bacchae 50–51)
13 The Syntax and Semantics of Expressions of Sorrow and Related Concepts in Homer
14 The Meaning and Word Class of πρότερον and τὸ πρότερον
15 Adverb or Connector? The Case of καὶ … δέ
16 Sur l’ article avec nom propre
17 Does Ancient Greek Have a Word for ‘no’? The Evidence from οὐκοῦν οὐ Questions
18 The Treatment of the Greek Middle Voice by the Ancient Grammarians
19 A Question of Questions: peusis, erôtêsis and [Longinus] Περὶ ὕψους 18.1
20 The Xenophon Factory: One Hundred and Fifty Years of School Editions of Xenophon’s Anabasis
Indexes
The volume will be of interest to academic libraries and institutes, and to all interested in Greek linguistics and literature.