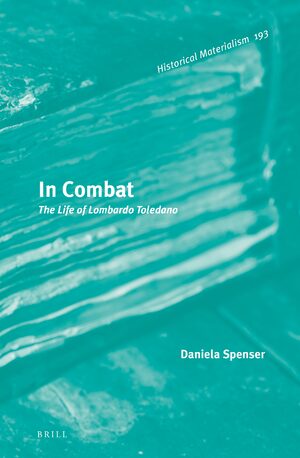 In Combat: The Life of Lombardo Toledano

Author: Daniela Spenser
Vicente Lombardo Toledano was the founder of numerous labour union organisations in Mexico and Latin America between the 1920s to the 1960s. He was not only an organiser but also a broker between the unions, the government, and business leaders, able to disentangle difficult conflicts. He cooperated closely with the governments of Mexico and other Latin American nations and worked with the representatives of the Soviet Union when he considered it useful. As a result he was alternately seen as a government stooge or a communist, even though he was never a member of the party or of the Mexican government administration.

Daniela Spenser's is the first biography of Lombardo Toledano based on his extensive private papers, on primary sources from European, Mexican and American archives, and on personal interviews. Her even-keeled portrayal of the man counters previous hagiographies and/or vilifications.
E-Book (PDF)

€195.00$234.00
​
Add to Cart
Daniela Spenser, Ph.D. (1994), University of North Carolina, Chapel Hill, is a professor at Centro de Investigaciones у Estudios Superiores en Antropología Social in Mexico City. Her research focuses on the history of communism and the Cold War in Mexico and Latin America.
Acknowledgements
List of Illustrations
Abbreviations

7 Fight Fascism!
1  The Defeat of the Spanish Republic
2  Exile
3  Face to Face with Leon Trotsky
4  The Pact and Its Violation
5  In Soviet Intelligence
6  The Undesirable Anti-fascists

Part 5 On the Fronts of the Cold Peace

All interested in the history of labour in Mexico and Latin America, US-Latin American labour relations, Mexican post-revolutionary history and the left. The book examines these themes through the biographical approach.