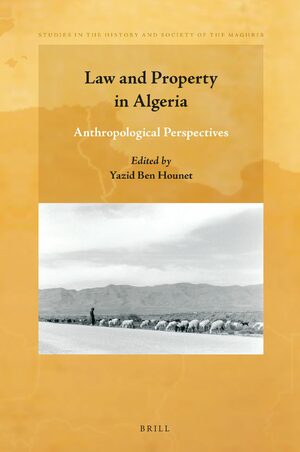 Law and Property in Algeria

Editor: Yazid Ben Hounet
In spite of its privileged place on the African continent, in the Muslim world and in the Middle East and North Africa region, Algeria remains poorly known, and the works relating to contemporary Algerian society published outside of Algeria are rare. This book seeks to contribute to our understanding of Algerian society today, through its relationships to property and to law. Beyond this, the objective is to propose, in a comparative perspective proper to anthropology, new theoretical and methodological perspectives by which to apprehend the anthropology of law in a Muslim context. Algeria, as a post-colonial and post-Socialist State, whose population is overwhelmingly Muslim, proves to be a particularly interesting case to study.

1 Land Tenure and Capital Ownership in Algeria
Ammar Belhimer
2 The Legitimacy of Tilling the Land versus Land Use Rights: Algerian Farmers’ Land Appropriation Processes on Public Land
Hichem Amichi, Marcel Kuper and Sami Bouarfa
3 Rights of Access or Rights to Bypass? Maritime Concessions in Algeria
Tarik Dahou
4 Dignity and Honour: Struggles over Land and Legitimacy in the Soummam Valley
Judith Scheele
5 Land Appropriation, Tenure and Legal Practices in a Steppe-like Environment (Algeria)
Yazid Ben Hounet
6 Anomie and the Post-Colonial State: Local Justice in the M’zab
Nejm Benessaiah
7 To Compensate or Not to Compensate? Law, Property and Sahrawi Refugees in Algeria
Alice Wilson
8 Kafāla and Succession: The Practices of Transfer of the “Parent’s” Name and Goods to an Adopted Child
Emilie Barraud

All interested in today Algeria, law and property in North Africa, post-colonial and post-socialist states.