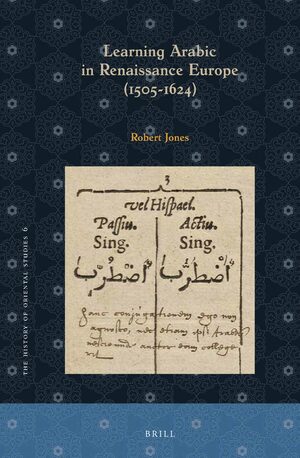 Author: Robert Jones
From the first Arabic grammar printed at Granada in 1505 to the Arabic editions of the Dutch scholar Thomas Erpenius (d.1624), some audacious scholars - supported by powerful patrons and inspired by several of the greatest minds of the Renaissance – introduced, for the first time, the study of Arabic language and letters to centres of learning across Europe. These pioneers formed collections of Arabic manuscripts, met Arabic-speaking visitors, studied and adapted the Islamic grammatical tradition, and printed editions of Arabic texts - most strikingly in the magnificent books published by the Medici Oriental Press at Rome in the 1590s. Robert Jones’ findings in the libraries of Florence, Leiden, Paris and Vienna, and his contribution to the history of grammar, are of enduring importance.
E-Book (PDF)


4  The Alphabetum Arabicum
1 Introduction
Figura
2 Arabic Script in the Alphabetum arabicum
3 Arabic Script in other Renaissance Arabic Grammars
Potestas
4 Arabic Vocalization. Imāla
5 Vocalization in the Alphabetum arabicum
6 Arabic Consonants in the Alphabetum arabicum
7 Arabic Consonants in other Renaissance Arabic Grammars
8 Conclusion
5 The Grammars of 1592
1 The Ājurrūmiyya within the Islamic Grammatical Tradition
2 The Ājurrūmiyya within the European Grammatical Tradition
3 The Rome Edition of 1592
4 The Kāfiya
5 Conclusion
6 The Liber Tasriphi
1 Introduction
2 Arabic Terms Preserved
3 Translations ad verbum and ad sensum
4 Postel and the Morphology of the Verb
5 Conclusion
7 Arabic Grammar Translated in Manuscript
1 A Note on the Derived Forms of the Verb
2 Kitāb Miʾat ʿāmil
8 Grammars of Persian Translated in Manuscript
1 Introduction
2 Qawānīn al-furs
3 Other Grammars of Persian
Concluding Remarks