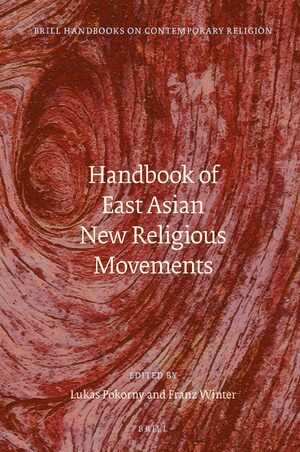 A vibrant cauldron of new religious developments, East Asia (China/Taiwan, Korea, Japan, and Vietnam) presents a fascinating arena of related research for scholars across disciplines. Edited by Lukas Pokorny and Franz Winter, the Handbook of East Asian New Religious Movements provides the first comprehensive and reliable guide to explore the vast East Asian new religious panorama. Penned by leading scholars in the field, the assembled contributions render the Handbook an invaluable resource for those interested in the crucial new religious actors and trajectories of the region.
E-Book (PDF)

Franz Winter, Ph.D. (1999 and 2005) and Habilitation (2010), is teaching Religious Studies at the University of Graz. His areas of research comprise, among others, the history of religious contact between Asia and Europe from Antiquity to the present and new religious movements.

'In the final analysis, the Handbook of East Asian Religious Movements is an excellently written, meticulously annotated, and elegantly presented collection of fine essays, which, in itself, is an outstanding scholarly achievement; not to mention the fact that a work of this magnitude has been long-awaited in the circles of East Asian religious studies.'
Lehel Balogh, Hokkaido University, Sapporo, Japan, Journal of Religion in Japan 7 (2018)

"The first comprehensive guide to the vast East Asian new religious panorama. Penned by leading scholars, the Handbook is an invaluable resource for those interested in the crucial new religious actors and trajectories of the region."
- ICAS Book Prize Committee, July 2019.

Acknowledgements
Notes on Romanisation and Style
List of Contributors

For all interested in contemporary East Asia, East Asian religions, and anyone concerned with the study of new religious movements.