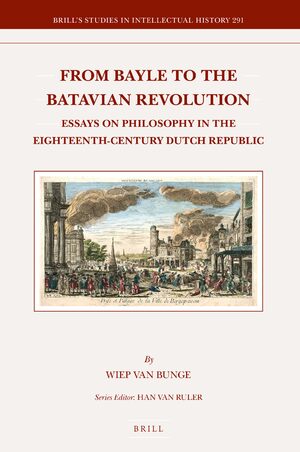 From Bayle to the Batavian Revolution

Essays on Philosophy in the Eighteenth-Century Dutch Republic

Author: Wiep van Bunge
This book is an attempt to assess the part played by philosophy in the eighteenth-century Dutch Enlightenment. Following Bayle’s death and the demise of the radical Enlightenment, Dutch philosophers soon embraced Newtonianism and by the second half of the century Wolffianism also started to spread among Dutch academics. Once the Republic started to crumble, Dutch enlightened discourse took a political turn, but with the exception of Frans Hemsterhuis, who chose to ignore the political crisis, it failed to produce original philosophers. By the end of the century, the majority of Dutch philosophers typically refused to embrace Kant’s transcendental project as well as his cosmopolitanism. Instead, early nineteenth-century Dutch professors of philosophy preferred to cultivate their joint admiration for the Ancients.
E-Book

Inroduction: the Exception of the Dutch Enlightenment

2 Bayle and Erasmus: The Politics of Appropriation
1 Erasmus of Rotterdam
2 Bayle on Erasmus
3 Erasmus and Bayle in the Republic of Letters
4 Conclusion

10 Tolerating Turks? Perceptions of Islam in the Dutch Republic
1 Dutch Diversity
2 Pirates and Pilgrims
3 Playwrights and Professors
4 A Radical Alternative

13 Spinoza’s Life: 1677–1802
1 Introduction
2 The Sources
3 Toland to Voltaire on the Virtuous Atheist
4 Wolff to Jacobi and Stijl to Collot d’Escury
5 Conclusion
Bibliography
Index

All interested in the history of early modern philosophy and the Dutch Republic, the Enlightenment, Bayle, Cartesianism, Newtonianism, Wolffianism, Kantianism, and Cosmopolitianism