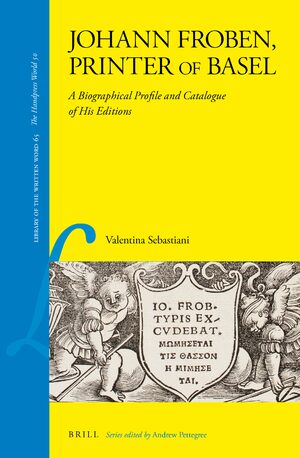 A Biographical Profile and Catalogue of His Editions

Author: Valentina Sebastiani
In Johann Froben, Printer of Basel, Valentina Sebastiani offers a comprehensive account of the life and printing production of Froben, a major representative of early modern Europe’s most refined printing traditions. Some five centuries after they first appeared in print, Sebastiani provides a bibliography of the 329 Froben editions published in Basel between 1491 and 1527 (including an analysis of some 2,500 copies held in more than twenty-five libraries worldwide), listing the paratextual and visual elements that distinguish Froben’s books as well as economic, technical, and editorial details related to their production and distribution. Sebastiani’s study sheds new light on Froben’s family and career, his involvement in the editing and publication of Erasmus’ works, and the strategies he adopted to market them successfully.
E-Book (PDF)

€215.00$248.00
​
Add to Cart
Valentina Sebastiani, Ph.D. (2010), Herzog August Bibliothek Wolfenbüttel, has worked as postdoctoral researcher at universities and libraries in Germany, Italy, Switzerland, The Netherlands, Canada, and the United States. She has published extensively on Erasmus of Rotterdam and the history of printing.
“This bio-bibliography is indispensable for both book historians and antiquarian bookdealers.” Frans A. Janssen, University of Amsterdam (emeritus). In: Quaerendo, Vol. 49, No. 1 (March 2019), pp. 83-85.
List of Figures

Note on the Catalogue

Historians of the Book, Renaissance and Reformation, bibliographers and librarians, and students and scholars interested in the history of printing in early modern Europe.