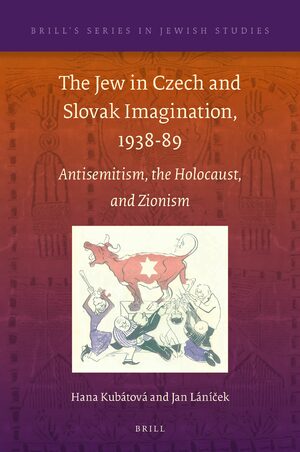 Antisemitism, the Holocaust, and Zionism

Authors: Hana Kubátová and Jan Láníček
The Jew in Czech and Slovak Imagination,1938-89 is the first critical inquiry into the nature of anti-Jewish prejudices in both main parts of former Czechoslovakia. The authors identify anti-Jewish prejudices over almost fifty years of the twentieth century, focusing primarily on the post-Munich period and the Second World War (1938–45), the post-war reconstruction (1945–48), as well as the Communist rule with both its thaws and returns to hardline rule (1948–89). It is a provocative examination of the construction of the image of ‘the Jew’ in the Czech and Slovak majority societies, the assigning of character and other traits – real or imaginary – to individuals or groups. The book analyses the impact of these constructed images on the attitudes of the majority societies towards the Jews, and on Holocaust memory in the country.

"This meticulously researched study covers the late 1930s to the 1960s in Czechoslovakia, then when Slovakia became a separate country under Nazi domination during WW II and much of the Czech Republic was a German 'protectorate.'...Summing Up: Highly recommended. Graduate students, faculty, professionals." - R.M. Seltzer, emeritus, Hunter College, CUNY, in: CHOICE 55.12 (2018)
E-Book (PDF)

€105.00$126.00
​
Add to Cart
Hana Kubátová, Ph.D. (1980) is Assistant Professor at the Charles University, Prague, Czech Republic. Her areas of research include majority-minority relations in Slovakia, social history of the Holocaust, and the relationship between memory and robbery. She has co-edited Jews and Gentiles in Central and Eastern Europe during the Holocaust. History and Memory (Routledge, 2018).
Jan Láníček, Ph.D. (1981) is Senior Lecturer at the University of New South Wales, Sydney, Australia. He specialises in modern European history and Jewish/non-Jewish relations during the Holocaust. He is the author of Czechs, Slovaks and the Jews, 1938-1948 (Palgrave, 2013) and Arnošt Frischer and the Jewish Politics of Early 20th-Century Europe (Bloomsbury Academic, 2016). He also co-edited Governments-in-Exile and the Jews during the Second World War (Vallentine Mitchell, 2013).
"This meticulously researched study covers the late 1930s to the 1960s in Czechoslovakia, then when Slovakia became a separate country under Nazi domination during WW II and much of the Czech Republic was a German “protectorate.”...Summing Up: Highly recommended. Graduate students, faculty, professionals." - R.M. Seltzer, emeritus, Hunter College, CUNY, in: CHOICE, August 2018 Vol. 55 No. 12
Acknowledgements Introduction  Objectives, Terminology and Approach 1 The Public Image of the ‘Jew’ during the War  Czechs and Slovaks Picture Each Other  The ‘Jew’ and 1938  Film  ‘Kohn Greets Sara’: Radio Waves and the Image of the Jew  Metaphors and Allegories of the ‘Jew’ in the Press 2 The ‘Jew’ in the Popular Opinion  Collaboration in the Protectorate and Slovakia  Methodology  The Regime in the Protectorate and in ‘Independent’ Slovakia  Robbery  The Breaking Point  Return of the Jews 3 The ‘Jew’ as a Reminder  Tales of Suffering  ‘We Know That You Are Not Guilty!’: Origins of the Postwar Myths  Heroes and Cowards  Collaboration and Guilt  Jews as Collaborators 4 When They Write ‘Zionist’, They Mean ‘Jew’  Czechoslovakia and Zionism until the Communist Takeover  Zionism As a Progressive Force?  Jew as a Zionist  Zionist Conspiracy with a ‘Human Face’ Conclusion Bibliography
All interested in the history of Jews in Europe, the Second World War, the Holocaust, Israel, antisemitism and anti-Zionism. Upper level undergraduate students (UK, USA), postgraduate students; academics.