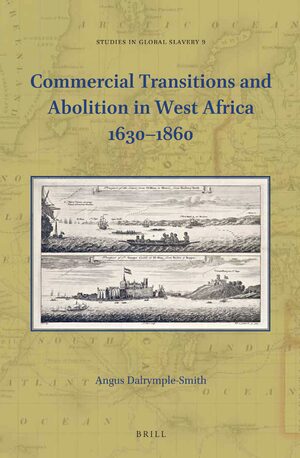 Author: Angus E. Dalrymple-Smith
Commercial Transitions and Abolition in West Africa 1630–1860 offers a fresh perspective on why, in the nineteenth century, the most important West African states and merchants who traded with Atlantic markets became exporters of commodities, instead of exporters of slaves. This study takes a long-term comparative approach and makes of use of new quantitative data.

It argues that the timing and nature of the change from slave exports to so-called ‘legitimate commerce’ in the Gold Coast, the Bight of Biafra and the Bight of Benin, can be predicted by patterns of trade established in previous centuries by a range of African and European actors responding to the changing political and economic environments of the Atlantic world.
E-Book (PDF)

€46.00$56.00
​
Add to Cart
Angus Dalrymple-Smith, Ph.D (2017), Wageningen University, is a lecturer and researcher on the impact of the transatlantic slave trade on West African economies and societies in the early modern period.
List of Figures, Maps and Tables
List of Appendices


The Long-Term Roots of the Commercial Transitions: Case Studies

4 The Gold Coast: Gold, Wealth and Power Amongst the Akans
1 Long-term Trade Contacts
2 A New Interpretation of the Impact of Abolition
3 Economic and Political Considerations in 1808
4 Gold and the Asante State
5 Household Labour Decisions

5 The Bight of Biafra: From Export Slavery to Slave Production
1 External Trade
2 The Value of the Commodity Trade and ‘comey’
3 Britain and Palm Oil Trading
4 Institutional Development in Biafra
5 The Demand for Labour and the Internal Slave Trade
6 Household Production of Palm Oil

6 The Bight of Benin: Dahomey and the Dominance of Export Slavery
1 Long-term Trends in Dahomey’s Trade
2 Comparative Value of the Slave and Commodity Trades
3 Trading Partners
4 Dahomean Militarism
5 Militarism and Labour

All interested in the impact of the transatlantic slave trade on the economies and societies of the Atlantic world in the early modern period.