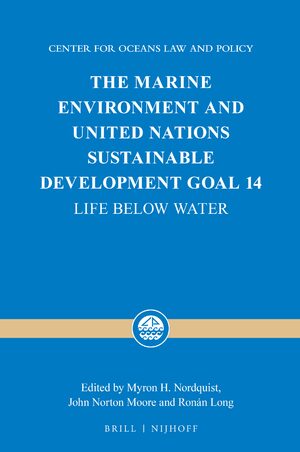 Series:  Center for Oceans Law and Policy, Volume: 22
Editors: Myron H. Nordquist, John Norton Moore, and Ronán Long
In The Marine Environment and United Nations Sustainable Development Goal 14, leading marine experts assess the scope, achievements, and limitations of UNSDG 14 for the conservation and sustainable use of marine resources. Chapters discuss the challenges and gaps of ocean governance through five key sections: Conservation and Sustainable Use of Oceans and Their Resources; Biodiversity beyond National Jurisdiction; Status of Deep Seabed Minerals; Marine Pollution and Coastal Ecosystems; and Climate Change and the Oceans. This important book illustrates current challenges facing sustainable marine development and management, and provides necessary insights for a coherent path forward.
E-Book (PDF)

Part 1: Conservation and Sustainable Use of Oceans and Their Resources

14 Marine Debris in Indonesia: State of Understanding and Ongoing Efforts in Reducing Its Impacts on Marine Habitat
Brahmantya Satyamurti Poerwadi and Abdul Muhari
15 A Perspective on Marine Pollution
Stephen A. Macko
16 A Human Rights Perspective on the Protection of Coastal Ecosystems from Land-based Marine Pollution under the United Nations Convention on the Law of the Sea
Chie Kojima

Part 5: Climate Change and the Oceans

All those interested in current issues related to the Law of the Sea.