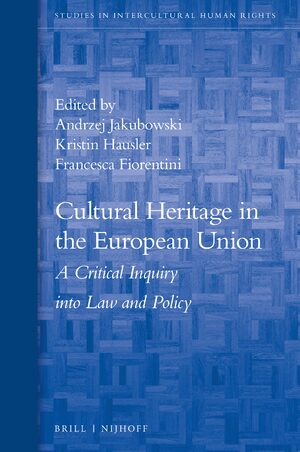 Cultural Heritage in the European Union

Series:  Studies in Intercultural Human Rights, Volume: 9
Editors: Andrzej Jakubowski, Kristin Hausler, and Francesca Fiorentini
Cultural Heritage in the European Union provides a critical analysis of the laws and policies which address cultural heritage throughout Europe, considering them in light of the current challenges faced by the Union. The volume examines the matrix of organisational and regulatory frameworks concerned with cultural heritage both in the Union and its Members States, as well as their interaction, cross-fertilisation, and possible overlaps. It brings together experts in their respective fields, including not only legal, but also cultural economists, heritage professionals, government representatives, and historians. The diverse backgrounds of the authors offer a cross-disciplinary approach and a variety of views which allows an in-depth scrutinisation of the latest developments pertaining to cultural heritage in Europe.
E-Book (PDF)

€179.00$215.00
​
Add to Cart
Andrzej Jakubowski, Ph.D. (2011), European University Institute, is Assistant Professor at the Institute pf Law Studies of the Polish Academy of Sciences. He is the editor of Cultural Rights as Collective Rights: An International Law Perspective (Brill/Nijhoff, 2016).

Kristin Hausler is the Dorset Senior Research Fellow in Public International Law at the British Institute of International and Comparative Law in London. Previously, she worked on a repatriation project at the Museum of Anthropology in Vancouver.

Francesca Fiorentini, Ph.D. (2004), University of Trento, is Associate Professor in Comparative Law at the University of Trieste. Her main research fields include: comparative and European law, comparative secured transactions law, comparative cultural property law; European private Law.
All interested in EU law and policy in the fields of cultural heritage, cultural rights, and cultural diversity. It is a valuable compendium for specialists, decision-makers, and graduate students.