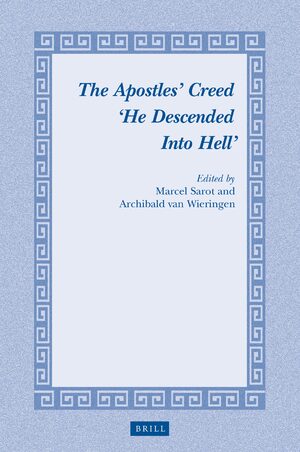 The Apostles’ Creed ‘He Descended Into Hell’

Series:  Studies in Theology and Religion, Volume: 24
Volume Editors: Marcel Sarot and Archibald L.H.M. van Wieringen
Though the number of Christians in Western societies is declining, many areas of our daily life are still influenced by Christian thoughts, expressions and images, sometimes without people being aware of it. This volume is about Christ's descent into hell as it appears in The Apostles' Creed 'He descended into hell', the Apostles' Creed professes.

But what are Christians who recite this Creed supposed to believe in when they profess their faith in the descent into hell? Or, to put the same question more poignantly, what is at stake if people deny the descent? Would it make any difference if we did not believe in the descent? How did the early Church interpret this belief? What influence has this article of faith had on contemporary theology and culture?

Starting with a biblical view, the volume covers the history of theology by discussing the ideas of Augustine, the liturgy of the Early Church, the role of Christ's decent in Franciscan spirituality and in the theology of Thomas Aquinas. It also asks whether similar theological ideas are present in Judaism. In addition, it gauges the meaning of Christ's descent for today by reflecting on pastoral activities and on computer games. The volume concludes with a fundamental theological reflection which systematises and summarises all the material presented in this volume.

€127.00$153.00
​
Add to Cart
Marcel Sarot, Ph.D. (1992), Utrecht University, is Dean of the Tilburg School of Catholic Theology. He has published extensively in philosophical theology, religious ethics and the philosophy of theology.

Archibald L.H.M. van Wieringen, PhD (1993) in Theology, is Professor at the Tilburg School of Catholic Theology. He has published extensively on the book Isaiah, using his communication-oriented exegesis, including 'Enlarge the Site of Your Tent'(Brill, 2010).

"As the editors explain in their introductory essay, the volume is first a practical application of reflections on method in theology that were published earlier (Archibald van Wieringen, ed., Theologie en methode, 2012) and which advocated for the necessity of a multidisciplinary approach in the study of complex theological themes. The volume shows the fruitfulness of such an approach. (...) I strongly recommend study of that book to everybody who wants to make a meaningful contribution on Christ’s descent. It is an invaluable source of information on questions related to Christ’s descent and offers stimulating reflections." - Ingrid Vorner, SA, Hekima College, Jesuit School of Theology, Nairobi, Kenya, in: Theological Studies 2019, Vol. 80(2), pp. 455-457.