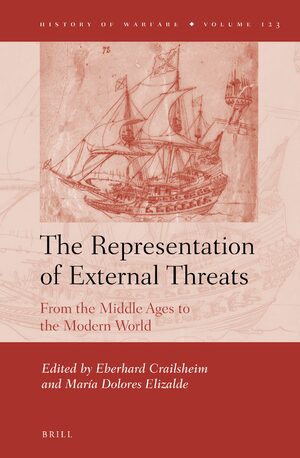 The Representation of External Threats

From the Middle Ages to the Modern World

Volume Editors: Eberhard Crailsheim and María Dolores Elizalde
In The Representation of External Threats, Eberhard Crailsheim and María Dolores Elizalde present a collection of articles that trace the phenomenon of external threats in a multitude of settings across Asia, America, and Europe. The scope ranges from military threats against the Byzantine rulers of the 7th century to the perception of cultural and economic threats in the late 19th century Atlantic, and includes conceptual threats to the construction of national histories.
Focussing on the different ways in which such threats were socially constructed, the articles offer a variety of perspectives and interdisciplinary methods to understand the development and representations of external threats, concentrating on the effect of 'threat communication' for societies and political actors.
Contributors are Anna Abalian, Vladimir Belous, Eberhard Crailsheim, María Dolores Elizalde, Rodrigo Escribano Roca, Simon C. Kemper, Irena Kozmanová, David Manzano Cosano, Federico Niglia, Derek Kane O’Leary, Alexandr Osipian, Pedro Ponte e Sousa, Theresia Raum, Jean-Noël Sanchez, Marie Schreier, Stephan Steiner, Srikanth Thaliyakkattil, Ionut Untea and Qiong Yu.
E-Book (PDF)

€127.00$153.00
​
Add to Cart
Eberhard Crailsheim, Ph.D. (2008), is Marie-Curie fellow (IF) at the Institute of History, Spanish National Research Council (CSIC). He is the author of The Spanish Connection (Böhlau 2016), and has published many articles on threats on the Philippines.
María Dolores Elizalde, Ph.D. (1988), is Scientific Researcher at the Institute of History, Spanish National Research Council (CSIC). She is specialized in international history and in colonial and postcolonial processes in Asia and the Pacific, with a particular focus on the Philippines.
"...this reader could be recommended as a topic-specific introduction to global history. [...] To be sure, the volume is a valuable undertaking for interdisciplinary research, as it brings this very vocabulary and theoretical models into historical research – or to put it in idiosyncratic German: It has a high potential of “Anschlussfähigkeit”. [...] its authors offer new perspectives on how to bring concepts and theories from political science, sociology, and ‘constructivism’ into the study of history. That is the pioneering ambition and the great achievement of this book. It should inspire and stimulate future endeavours and theory-testing.", Thomas Kolnberger in: H-Soz-Kult, 10.11.2020, DOI: www.hsozkult.de/publicationreview/id/reb-49809.

Part 1
Conceptual Approaches
1 Representations of External Threats: Approaches and Concepts for Historical Research
Eberhard Crailsheim
2 The Opposition of Own/Alien as a Source of the External Threat: Reflections on Supra-State Sovereignization Politics and 19th-Century Pan-Slavism
Vladimir Belous

Part 3: Representation of the Internal/External Other

6 The Enemy Within: ‘Gypsies’ as EX/INternal Threat in the Habsburg Monarchy and in the Holy Roman Empire, 15th-18th Century
Stephan Steiner
7 Performing the Ottoman Threat: Visual and Discursive Representations of Armenian Merchants in Early Modern Poland and Moldavia
Alexandr Osipian
8 The ‘Pale of Settlement’: a Particular Form of Separation of the ‘Own’ and the ‘Alien’ in the Russian Empire
Anna Abalian

Part 4: The Creation of Threats in the Old World

9 Back to the Huns: the German Threat in the European Collective Imagination, 1527-1914
Federico Niglia
10 External Authority or External Threat? Thomas Hobbes and the Politically Troubled Times of Early Modern England
Ionut Untea
11 Corruption as an External Threat? Anti-Corruption Legislation During the Dutch ‘Great Assembly’ (1651)
Irena Kozmanová

Part 6: Threats in the Colonial Context of the Pacific World

15 A Prismatic Glance at One Century of Threats on the Philippine Colony
Jean-Noël Sanchez
16 Strategies Against External Threats to Spanish Sovereignty in a Colonial Territory: The Case of the Philippines in the 19th Century
María Dolores Elizalde
17 The Imperial Enemies of Spain in Hispanic Oceania: the Case of Japan
David Manzano Cosano

Part 7: Perceptions of the Other: Chinese-European Encounters

18 Securitization of Christianity during the Period of the Qing Dynasty
Srikanth Thaliyakkattil
19 The Arrogant Chinese: Representation of the Chinese and Chinese Civilisation in Britain’s Travel Writings in the 19th Century
Qiong Yu
Index

All interested in theory and pratice of communication; governance; the topic of threats in general and anyone concerned with the history of international relations and security studies.