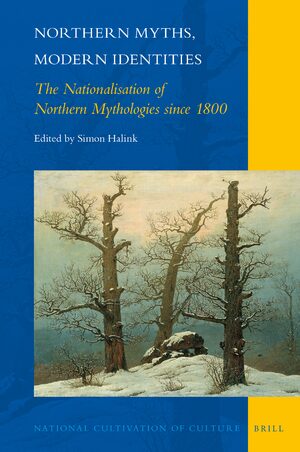 The Nationalisation of Northern Mythologies Since 1800

Editor: Simon Halink
This anthology of essays, Northern Myths, Modern Identities, explores the various ways in which ancient mythologies have been cultivated in the cultural construction of ethnic, national and supra-national identities from 1800 to the present. How were Old Norse, Finno-Ugric and Frisian myths employed as rhetorical devices in national narratives? And how did (and do) these new interpretations convey a sense of ‘northernness’? This volume approaches these issues from an interdisciplinary and international perspective, and brings together case studies from Scandinavia, the Baltic region, Friesland, Britain, the United States and even Japan. Thus, it provides a unique insight into the reception history and uses of northern myths in the present, and their role in the creation of modern identities.

€105.00$126.00
​
Add to Cart
Simon Halink, Ph.D., is a postdoctoral researcher at the Faculty of Icelandic and Comparative Cultural Studies, University of Iceland. He has published on the role of Norse mythology and philology in nationalism and on images of Iceland in Nazi Germany.

List of Figures and Tables
About the Authors
Northern Myths, Modern Identities: An Introduction
Simon Halink


1The North: A Cultural Stereotype between Metaphor and Racial Essentialism
Joep Leerssen
2Within or Outside Europe? Modernists and Anti-modernists Visiting Iceland in the Mid-nineteenth Century
Sumarliði R. Ísleifsson
3Is Nordic Mythology Nordic or National, or Both? Competing National Appropriations of Nordic Mythology in Early Nineteenth-Century Scandinavia
Tim van Gerven


4Norse Myths, Nordic Identities: The Divergent Case of Icelandic Romanticism
Gylfi Gunnlaugsson
5Redbad, the Once and Future King of the Frisians
Han Nijdam and Otto S. Knottnerus
6Norse Mythology in Icelandic Fiction about the Second World War
Daisy L. Neijmann
7Of Gods and Men: Uses and Abuses of Neo-Paganism by Nationalist Movements in the “North”
Robert A. Saunders


8Heirs of Lönnrot: From Longfellow to Tolkien
Tom Shippey
9Kalevala in International Masks: A Japanese Aino and Kalevala dell’ a rte
Kendra Willson
10The Quest of Gangleri: Theosophy and Old Norse Mythology in Iceland
Simon Halink

Part 4: Beyond the Nation?


11Crossing the Borders: Loki and the Decline of the Nation State
Katja Schulz
12Apocalypse Now: Norse Gods and the End of the Nation
Carline Tromp
Index of Names and Subjects

All who are interested in the reception history of mythology, northernness, the development of national identities and processes of nation-building from the nineteenth century to the present.