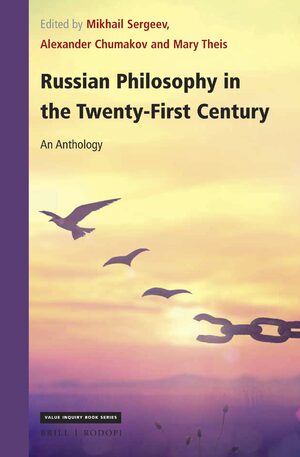 Russian Philosophy in the Twenty-First Century

Editors: Mikhail Sergeev, Alexander N. Chumakov, and Mary Theis
Russian Philosophy in the Twenty-First Century: An Anthology provides the English-speaking world with access to post-Soviet philosophic thought in Russia for the first time. The Anthology presents the fundamental range of contemporary philosophical problems in the works of prominent Russian thinkers. In contrast to the “single-mindedness” of Soviet-era philosophers and the bias toward Orthodox Christianity of émigré philosophers, it offers to its readers the authors’ plurality of different positions in widely diverse texts. Here one finds strictly academic philosophical works and those in an applied, pragmatic format—secular and religious—that are dedicated to complex social and political matters, to pressing cultural topics or insights into international terrorism, as well as to contemporary science and global challenges.
E-Book (PDF)

€135.00$162.00
​
Add to Cart
Mikhail Sergeev (Ph.D. Temple University, 1997), Adjunct Professor of Philosophy and Religion at the University of the Arts, Philadelphia, has authored or edited numerous articles, journals and books, including Theory of Religious Cycles: Tradition, Modernity and the Bahá’í Faith (Brill, 2015).

Mary Theis (Ph.D. University of Illinois at Urbana-Champaign, 1983), Professor emerita of Russian and French (Kutztown University of Pennsylvania), has authored or edited articles, journals and books, including Mothers and Masters in Contemporary Utopian and Dystopian Literature (Peter Lang, 2009).
From the Editors

Boris Markov
The Image of “The Other”: xenophobia and Xenophilia
Boris Markov

All who are interested in philosophy and contemporary Russian thought or concerned with global challenges facing humanity, including social and political matters, pressing cultural issues, or insights into international terrorism.