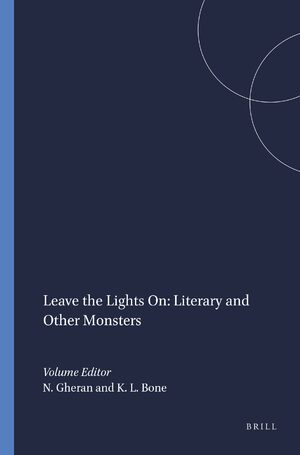 Leave the Lights On: Literary and Other Monsters

Editors: Niculae Gheran and Kristin L. Bone
This volume was first published by Inter-Disciplinary Press in 2016.

The present e-book contains contributions by scholars from all over the world who gathered to present their research, exchange ideas and comments while advancing discourse on the main topic. The purpose of the book is to analyze the meaning behind different representations of monsters and monstrosity in different types of media and cultural contexts. Two main categories have become the basis for the chapters of the volume: Monsters in Literature and the Monsterization of the Other. The various topics approached range from discussions on graphic and dystopian novels, classic monster figures like Medusa or the image of the vampire and zombie. The talks also included discussions of works by great film directors such as Pedro Almodóvar, media representation of police and black bodies in everyday life and authors such as Martin Millar, George Eliot, George Orwell, Alan Moore and Terry Pratchett.
E-Book (PDF)

€25.00$30.00
E-Book (PDF)
Add to Cart
Niculae Gheran is a PhD in English and Comparative Literature. His work focuses on spatiality, more specifically the spatiality of Anglophone dystopias. He has several papers published in international journals on the topic. He is also an English teacher and freelance editor.

Kristin L. Bone has a master’s degree in modern literary cultures and is working toward her PhD. She is the author of the Black Rose dark fantasy series and the Rise of the Temple Gods fantasy series. Bone has spent the last few years as a world traveler, living in California, London, and most recently, Dublin. When not immersed in words of her own creation or studies, you’ll find her traveling to mythical sites and Game of Thrones filming locations.