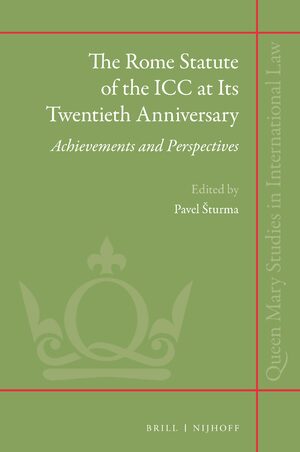 The Rome Statute of the ICC at Its Twentieth Anniversary

Editor: Pavel Šturma
The Rome Statute of the ICC at its Twentieth Anniversary (Achievements and Perspectives) is an edited book comprising of 13 chapters written by contributors to a conference dedicated to discuss the development, achievements and possible future evolution of the Rome Statute and international criminal law. The authors include academics from various legal systems, practitioners from the ICC and the Special Tribunal for Lebanon, attorneys and other law experts.

Part 1: A Way to the Rome Statute and beyond

Part 2: Contribution of the to the Definition and Interpretation of International Crimes


4 On the Activation of Jurisdiction over the Crime of Aggression
Claus Kreß
5 International Criminal Court, War Crimes and Crimes against Humanity
Josef Mrázek
6 Contribution of the International Criminal Court to the Prosecution of Sexual and Gender-Based Crimes: Between Promise and Practice
Kateřina Uhlířová
7 Mental Element (mens rea) of the Crime of Aggression and Related Issues
Milan Lipovský


8 Making the Wrong Enemies? The Prosecutor’s Dilemma When Targeting Powerful States at the Preliminary Examination Stage
Iryna Marchuk and Aloka Wanigasuriya
9 The International Criminal Court and Syria: The Absence of Jurisdiction and the Pressing Need for International Criminal Justice
Jan Lhotský
10 The Principle of Complementarity in Practice
Kristýna Urbanová
11 Al-Bashir and the – Tag, Hide-and-Seek … or Rather Blind Man’s Bluff?
Ondřej Svaček