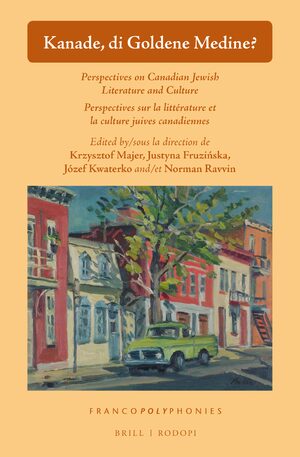 Editors: Krzysztof Majer, Justyna Fruzińska, Józef Kwaterko and Norman Ravvin
Kanade, di Goldene Medine offers a broad study of its field, with equal attention to English- and French-language materials and contexts. The volume’s essays highlight the fundamental link between the culture and life of Canadian Jews and their Polish roots. This focus brings Yiddish to the fore, in essays focusing on the history of Canadian Yiddish literature, and the relevance of the language for contemporary Canadian Chasidic communities. However, essays in this volume also highlight the writings of contemporary authors, working both in French and English. Thus, the collection explores culture at the borderlands of three languages, with an eye for the link between New Worlds and Old.

€129.00$155.00
​
Add to Cart
Krzysztof Majer is Assistant Professor of American Literature at the University of Lodz, Poland. He has published on Canadian literature, North American Jewish culture and intermediality. He is also an awarded translator of literature (e.g Allen Ginsberg, Jack Kerouac, Michael Chabon, Patrick deWitt and Michael Herr).

Justyna Fruzińska is Assistant Professor of American studies at the University of Lodz. Her publications include articles on American popular culture, transcendentalism, and Polish poetry. She is also a published poet and translator working in Polish, English, and Hebrew.

Józef Kwaterko is a professor at the University of Warsaw, where he directs the Centre for the Study of French Canadian Culture and Quebec Literature. His research interests are sociocriticism and Francophone literature of the Americas (Quebec, West Indies and Guyana, Haiti), to which he has devoted several books and articles. He is the translator into Polish of Michel Tremblay’s plays.

Norman Ravvin is a writer, critic and professor at Concordia University, Montreal. His books include the novels Lola by Night and The Joyful Child, the story collection Sex, Skyscrapers, and Standard Yiddish and Hidden Canada: An Intimate Travelogue. His literary essays appear in A House of Words: Jewish Writing, Identity, and Memory.