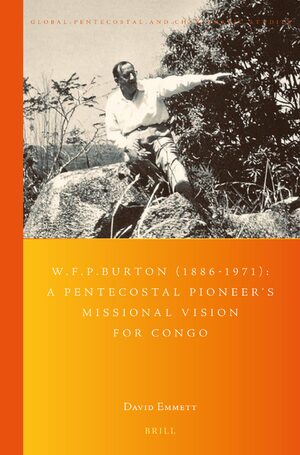 Author: David Neil Emmett
Emmett contributes to missional pentecostal historiography through bringing a pre-eminent figure in early British Pentecostalism into the limelight. He shows how Pentecostalism in Belgian Congo was pioneered by W.F.P. Burton alongside local agency. Central to Burton’s contradictory and complex personality was a passionate desire to see the emancipation of humankind from the spiritual powers of darkness believing only Spirit-empowered local agency would enduringly prove effective.

Burton’s faith believed for Spirit intervention in church communities converting lives, bringing physical healing and transforming regions. In the maelstrom following Congolese Independence, Burton’s belief in his own brand of indigenisation made him an outlier even among Pentecostals. Burton’s pentecostal faith engendered an idealism which frustratingly conflicted with those not sharing it in the way he pursued it. This book thus serves Pentecostals and historians by clarifying Burton’s ideals and revealing the reasons for his frustrations.
E-Book (PDF)

€59.00$69.00
​
Add to Cart
David Emmett, Ph.D. (2017), University of Birmingham, is a tutor and lecturer at St Mellitus College, UK. He worked for ten years in the Democratic Republic of Congo with the Pentecostal church.
W.F.P. Burton was a mythic and enigmatic figure of early Pentecostalism. Fiercely independent, inconsistent, and successful, he was an unstoppable force (with James Salter) building the Congo Evangelistic Mission, one of the earliest Pentecostal mission societies. Scholars of Pentecostalism and World Christianity have, until now, mostly shied away from Burton, justifiably intimidated by the complications of researching scattered archives, publications in not-yet digitized periodicals, books that are difficult to interpret, and a mass of uncritical popular literature with crucial details lurking in texts aimed at fund and prayer solicitation. David Emmett has had the courage to assemble, sort, and interpret these in the context of the repressive Belgian colonial structures and the evolving UK Pentecostal mission policy and politics. The resulting scholarly interpretation of Burton, his relationship with the Congo, and his role in global Pentecostalism is a historiographical tour-de-force. — Dr. David Bundy, Associate Director, Manchester Wesley Research Centre

This book is an important addition to the thriving field of studies on global Pentecostalism. Written in lucid and erudite style, it examines one of the most important Pentecostal missions in Africa, the Congo Evangelistic Mission, through a biography of its founder, the British Pentecostal W.F.P. Burton. Emmett shows how Pentecostalism in the Belgian Congo was pioneered by Burton alongside local agency. The study explores Burton’s pioneering role within two strands of the global Pentecostal movement, British Pentecostalism and Congolese Pentecostalism. Emmett portrays Burton as a frustrated idealist whose ideal of an indigenous church in Congo was frustrated in his lifetime. On the one hand, the book charts the life story of a Pentecostal pioneer and advocate of indigenisation, who has been largely neglected within Pentecostal historiography. On the other, it restores the role played by local agents in establishing Congolese Pentecostalism by creating a historiography ‘from below’.
Emmett draws upon both archival and oral sources, which are used critically to illuminate the nature of missionary and Congolese interaction. The book makes a significant contribution to Pentecostal historiography and to our understanding of the evolving interplay between missionaries and indigenous evangelists in one of Africa’s most populous nations. — Dr Richard Burgess, University of Roehampton, UK

Given the enormous impact of global Pentecostalism on Christianity in general and African Christianity in particular, few Western figures in twentieth-century Christianity have been more unjustifiably neglected in biographic treatment than William Burton. A majority of academic biographies of early Pentecostals so far have focused on figures in the West, but the ministry of Burton and his African colleagues was highly influential; unlike many stories, it also left behind numerous contemporary records. Emmett is to be commended both for his choice of subject and for his engaging, sympathetic yet critical, and extremely well-researched treatment of this important figure. Emmett is also one of the few scholars, and at one of the last possible times in history, to be able to engage actively much reliable oral memory of this significant leader. — Craig S. Keener, F. M. and Ada Thompson Professor of Biblical Studies, Asbury Theological Seminary

Burton’s remarkable life can be appreciated at a human level and this book will bring his enthralling story to a wider audience but, when put into the context of the first part of the 20th century, his achievements stand tall. He can reasonably be compared with John Wesley, Hudson Taylor or William Booth. — William K. Kay, Revd Professor, Glyndŵr University

1 Introduction
1.0 A Study Worth Doing
1.1 A Study within a Broader Context
1.2 A Brief Survey of Burton’s Resonance in British Pentecostalism
1.4 Methodologies
1.5 The Value of Burton’s Letters
1.6 Preserving Archives
1.7 Personal Connections
1.8 Methods and Approaches to Historiographical Writing
1.9 An Overview
1.1 0Conclusion: the Significance of this Study

4 Burton’s Relationships with Congolese Pentecostals, Especially Ngoloma Ndela Bantu (1916–1939)
Introduction
4.0 The Frontier Narratives of the CEM
4.1 Ngoloma: one of the ‘Native Evangelists’
4.2 Considerations Based on the Ngoloma Story

Appendix 5 The Rights and Wrongs of Indigenous Principles

Appendix 8 Harold Womersley’s map of the field in 1935

Appendix 9 Harold Womersley’s map of the field in 1965

Those interested in early British Pentecostalism and the workings of its foremost missionary society and those desirous of broadening their understanding of its evolving missional strategies. Congolese historians will appreciate the biographical writing on key Congolese pioneers.