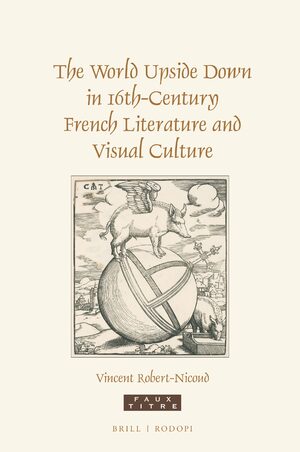 Author: Vincent Robert-Nicoud
In The World Upside Down in 16th Century French Literature and Visual Culture Vincent Robert-Nicoud offers an interdisciplinary account of the topos of the world upside down in early modern France. To call something ‘topsy-turvy’ in the sixteenth century is to label it as abnormal. The topos of the world upside down evokes a world in which everything is inside-out and out of bounds: fish live in trees, children rule over their parents, and rivers flow back to their source. The world upside down proves to be key in understanding how the social, political, and religious turmoil of sixteenth-century France was represented and conceptualised, and allows us to explore the dark side of the Renaissance by unpacking one of its most prevalent metaphors.
E-Book (PDF)

€121.00$146.00
​
Add to Cart
Vincent Robert-Nicoud, D.Phil. (2016), University of Oxford, has published articles on various aspects of early modern French literature, especially on polemic and satire during the French wars of religion.
Acknowledgements
List of Illustrations
Abbreviations

Introduction: The Sixteenth-Century World Upside Down