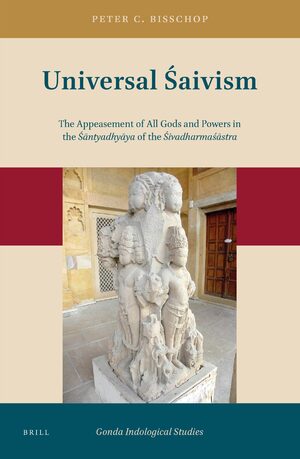 Author: Peter Bisschop
In Universal Śaivism Peter Bisschop provides a critical edition and annotated translation of the sixth chapter of the Śivadharmaśāstra `Treatise on the Religion of Śiva’, the so-called Śāntyadhyāya 'Chapter on Appeasement’. The Sanskrit text is preceded by an extensive introduction on its composition, transmission and edition.
The Śivadharmaśāstra has arguably played a crucial role in the formation, development and institutionalisation of Śaivism. Through a detailed study of its extensive śānti mantra, Peter Bisschop shows how the text advocates a system in which all worldly and cosmic power is ultimately dependent upon Śiva. The mantra itself is a mine of information on the evolving pantheon of early Brahmanical Hinduism.
Thanks to generous support of the J. Gonda Fund Foundation, the e-book version of this volume is available in Open Access.
E-Book

Open Access
​
Add to Cart
About MyBook
Peter Bisschop, Ph.D. (2004), is Professor of Sanskrit and Ancient Cultures of South Asia at Leiden University. He has published extensively on early Brahmanical Hinduism, including Early Śaivism and the Skandapurāṇa: Sects and Centres (Egbert Forsten, 2006).
All interested in the history of Hinduism, in particular early Śaivism, and all scholars of Sanskrit literature.