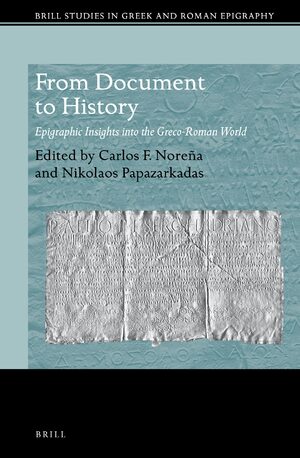 Epigraphic Insights into the Greco-Roman World

Series:  Brill Studies in Greek and Roman Epigraphy, Volume: 12
Editors: Carlos F. Noreña and Nikolaos Papazarkadas
In From Document to History: Epigraphic Insights into the Greco-Roman World, editors Carlos Noreña and Nikolaos Papazarkadas gather together an exciting set of original studies on Greek and Roman epigraphy, first presented at the Second North American Congress of Greek and Latin Epigraphy (Berkeley 2016). Chapters range chronologically from the sixth century BCE to the fifth century CE, and geographically from Egypt and Asia Minor to the west European continent and British isles.

Key themes include Greek and Roman epigraphies of time, space, and public display, with texts featuring individuals and social groups ranging from Roman emperors, imperial elites, and artists to gladiators, immigrants, laborers, and slaves. Several papers highlight the new technologies that are transforming our understanding of ancient inscriptions, and a number of major new texts are published here for the first time.
E-Book (PDF)

€123.00$148.00
​
Add to Cart
Carlos F. Noreña, Ph.D. (2001), University of Pennsylvania, is Associate Professor of History at the University of California, Berkeley. He has published widely in Roman history and culture, and is the author of Imperial Ideals in the Roman West (Cambridge University Press, 2011) and editor of A Cultural History of Western Empires in Antiquity (Bloomsbury Academic, UK, 2018).
Nikolaos Papazarkadas, D.Phil (2004), University of Oxford, is Associate Professor of Classics at the University of California, Berkeley. He is the author of many works in Greek epigraphy and history, including Sacred and Public Land in Ancient Athens (Oxford University Press, 2011) and the editor of The Epigraphy and History of Boeotia: New Finds, New Prospects (Brill Studies in Greek and Roman Epigraphy vol. 4, 2014).
Contents
List of Illustrations
Notes on Contributors


1 Epigraphy of the Night
Angelos Chaniotis

2 War Orphans and Orphans of Democracy in Classical Athens: the Decree of Theozotides and the Prytaneion Decree Reconsidered
Sviatoslav Dmitriev

4 Writing on the Wall: The Epigraphy of Fortification and the Attic Deme of Rhamnous
Noah Kaye

7 The horologion of Dexippos: a Fresh Insight into Hellenistic Lemnos
Francesca Rocca

10 Graffiti in the So-Called College of Augustales at Herculaneum (Insula VI 21, 24): New Work from the Ancient Graffiti Project
Stephanie Frampton

12 Public in Private: the Distribution and Content of Graffiti in Pompeian domus and hospitia
Jacqueline DiBiasie Sammons

14 Casting a Wide Net: Searching for Networks of Gladiators and Game-givers in Campania
Virginia Campbell

16 Public Slaves in Rome and in the Cities of the Latin West: New Additions to the Epigraphic Corpus
Franco Luciani

19 A New Statue Base of Septimius Severus from Lambaesis: the Army and the Emperor in Severan North Africa
Riccardo Bertolazzi

All interested in Greek and Roman epigraphy and Greek and Latin inscriptions, and anyone concerned with the documentary evidence for ancient Greek and Roman political, economic, religious and cultural history.