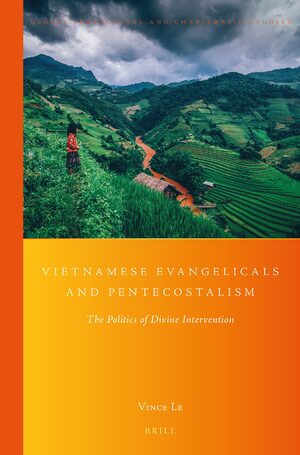 The Politics of Divine Intervention

Author: Vince Le
This book offers an analysis of the historical, theological, and social conditions that give rise to the growth of pentecostalism among contemporary Vietnamese evangelicals. Emerging from the analysis is an understanding of how underprivileged evangelicals have utilized the pentecostal emphasis on divine intervention in their pursuit of the betterment of life amid religious and ethnic marginalization.
Within the context of the global growth of pentecostalism, Vietnamese Evangelicals and Pentecostalism shows how people at the grassroots marry the deeply local-based meaning dictated by the particularity of living context and the profoundly universal truth claims made by a religion aspiring to reach all four corners of the earth to enhance life.
E-Book (PDF)

€49.00$57.00
​
Add to Cart
Vince Le, Ph.D. (2016), Regent University, is Instructor of Theology at Vietnamese Theological College.
“It is not widely unknown that a combination of Vietnamese Evangelicalism and Pentecostalism has grown remarkably by a factor of at least 12, especially among underprivileged ethnic minorities, since the unification of Vietnam under communism four decades ago. Vince Le’s astute inquiry into the nature of century-old Vietnamese Evangelicalism and its 30-year old close sibling Pentecostalism is a rare, wonderful and welcome addition to the sparse scholarship on these phenomena. Through a taxonomy of “the world”, justice, culture, development, and the underprivileged he masterfully demonstrates how Evangelicalism, particularly in its Pentecostal expression emphasizing divine power, is shaped by Vietnam’s turbulent historical and social conditions, and how its beliefs and practices not only imagine and contribute to a better life but also subvert the hegemonic authoritarian status quo.” - Reg Reimer, author of Vietnam’s Christians: A Century of Growth in Adversity
“In this multifaceted volume, Vince Le provides a framework for understanding Vietnamese Evangelicalism. He complexifies facile narratives of Evangelical churches, and Pentecostals in particular, which often claim to be socially disinterested and politically disengaged. Well-versed on the tumultuous communist history and multi-ethnic reality of Vietnam, he shows, instead, how Evangelicals have navigated the social context, negotiated political structures, and reconfigured theological ideas even amidst social marginalization. This work is an invitation to reorient the overly spiritualized Evangelical/Pentecostal notion of social transformation toward a pneumatological/divine care for and commitment to the socially disenfranchised, an insight which resonates with liberation theological currents elsewhere.” - Néstor Medina, PhD. Visiting Scholar at Emmanuel College Centre for the Study in Religion
“To read this book is to appreciate the stakes of Christian theology, to understand why sharp analysis, careful historical research, textual exegesis, scriptural reasoning and confessional identity matter for Christianity. In a time when academic theology too often reduces itself to arcane matters, Vince Le reminds us what theology can and should do. The book’s conceptual richness, practical engagements and rhetorical elegance bestow upon its apologetic task, the articulation and defense of Pentecostal evangelicalism, irrepressible courage and compassion for the powerless empowered by the Spirit, the dispossessed possessed of God. The text directs its treasure trove of resources to those most in need of it, helping Vietnamese Christians and everyone willing to learn from them fathom not only what it means for God to intervene but also what asking such questions amounts to. An absolute revelation!” - Jonathan Tran, George W. Baines Professor of Religion at Baylor University
Abbreviations Foreword Preface Introduction 1 The World  1.1 Zeitgeist  1.2 The World  1.3 Transformation  1.4 Apocalypse Now!  1.5 Conclusion 2 Justice  2.1 Social, Not Political, Involvement  2.2 Love  2.3 Rights  2.4 Deliverance  2.5 Conclusion 3 Culture  3.1 The Vietnamization of Faith  3.2 Contextualization  3.3 Iconoclasm  3.4 Multi- Ethnicity  3.5 Conclusion 4 Development  4.1 National Development  4.2 Transformational Development  4.3 Prosperity Teaching  4.4 The Value of Prosperity Teaching  4.5 Conclusion 5 The Underprivileged  5.1 Becoming Pentecostal  5.2 Aspiring Newness  5.3 Receiving Justice  5.4 Becoming Privileged  5.5 Conclusion   Conclusion   Bibliography   Index
All interested in global pentecostalism, especially its development in the Global South, and anyone concerned with Vietnamese evangelicalism.