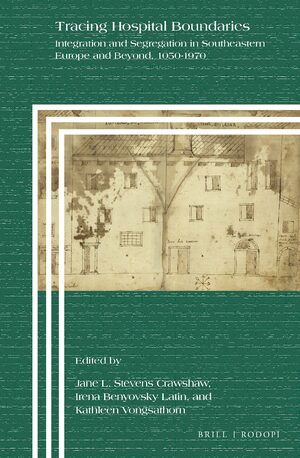 Integration and Segregation in Southeastern Europe and Beyond, 1050-1970

Volume Editors: Jane L. Stevens Crawshaw, Irena Benyovsky Latin, and Kathleen Vongsathorn
Tracing Hospital Boundaries explores, for the first time, how the forces of both integration and segregation shaped hospitals and their communities between the eleventh and twentieth centuries in Europe, North America and Africa. Within this broad comparative context it also shines a light on a number of case studies from Southeastern Europe.
The eleven chapters show how people’s access to, and experience of, healthcare institutions was affected by social, cultural and economic, as well as medical, dynamics. These same factors intersected with developing healthcare technologies to shape hospital design and location, as well as internal policies and practices. The volume produces a new history of the hospital in which boundaries – both physical and symbolic – are frequently contested and redrawn.

€125.00$150.00
​
Add to Cart
Jane Stevens Crawshaw, MA (hons), MPhil, Ph.D. (2008) University of Cambridge, is Senior Lecturer in Early Modern European History at Oxford Brookes University. In 2012 she published her first book, which was the first holistic study of the development of quarantine and public health in early modern Venice. She has published articles and book chapters on a number of aspects of the social, cultural, environmental and gender history of health in Renaissance Italy.

Irena Benyovsky Latin is a scholarly advisor at the Department of Medieval History, Croatian Institute of History. Her research focuses on medieval urban history in the Eastern Adriatic (especially Trogir and Dubrovnik), urban social topography, the development of medieval urban institutions and the relationship between cities and central authorities. Since 2015 she has been the PL of the research project "Towns and Cities of the Croatian Middle Ages: Urban Elites and Urban Space“, supported by the Croatian Science Foundation. She is the Croatian representative on the International Committee of the History of Towns.

1 Beyond the City’s Walls: The Lepers of Narbonne and Siena before the Black Death
Anna M. Peterson

6 From Isolation to Integration: the Institutional Treatment of Burns Patients in Britain, c.1845–1950
Jonathan Reinarz

All interested in hospital history, as well as the dynamics of space, marginality and inclusivity.