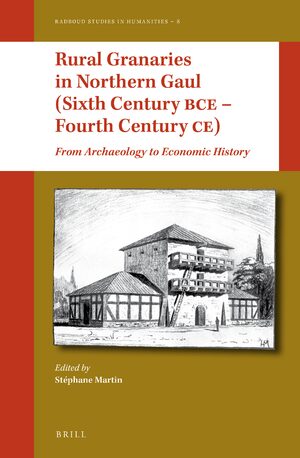 From Archaeology to Economic History

Series:  Radboud Studies in Humanities, Volume: 8
Editor: Stéphane Martin
In recent years, storage has come to the fore as a central aspect of ancient economies. However studies have hitherto focused on urban and military storage. Although archaeological excavations of rural granaries are numerous, their evidence has yet to be fully taken into account. Such is the ambition of Rural Granaries in Northern Gaul (Sixth Century BCE – Fourth Century CE). Focusing on northern Gaul, this volume starts by discussing at length the possibility of quantifying storage capacities and, through them, agrarian production. Building on this first part, the second half of the book sketches the evolution of rural storage in Gaul from the Iron Age to Late Antiquity, setting firmly archaeological evidence in the historical context of the Roman Empire.
E-Book (PDF)

€83.00$100.00
Hardback
Add to Cart
About MyBook
Stéphane Martin, Ph.D. (2013), École Pratique des Hautes Études, is associate researcher at the Université de Poitiers, EA 3811 HeRMA. His research focuses on the history and archaeology of Gaul between the Iron Age and the Roman period.
"[The book] is always thought-provoking and is appealing in its frankness: the work-in-progress of a group of scholars with a common interest in an important and newly active field, who think differently but who are prepared to engage in reciprocal criticism. It has an extensive bibliography and two useful indices, and is linked (by ‘cat.’) to an online table and bibliography." - John. F. Drinkwater, in: BMCR 2019.12.11
Contents


1 A Model for Calculating the Capacities of horrea and Agricultural Areas of Gallo-Roman villae in the Province of Germania superior
Lars Blöck
2 Is It Possible to Quantify the Roman Agrarian Economy? In Favour of Quantitative Scepticism
Javier Salido Domínguez
3 Calculating the Storage Capacities of Granaries: A Tentative Model
Stéphane Martin

Part 2: Storage through Time and Space

Bibliography
Index of Ancient Sources and Inscriptions
Index of Place Names
All interested in the economic history and in the agriculture of the Roman Empire, and more generally of pre-industrial agrarian economies.