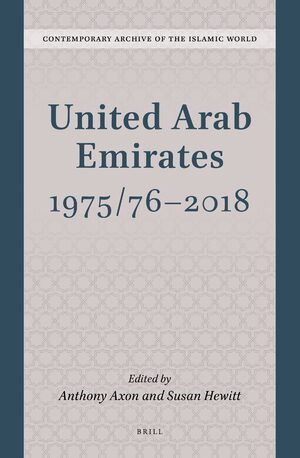 Editors: Anthony Axon and Susan Hewitt
The second volume in a new series, the Contemporary Archive of the Islamic World (CAIW), this title draws on the resources of World of Information, a Cambridge-based British publisher that since 1975 has published analyses of the politics and economics of all the Middle East countries.

The United Arab Emirates is a young country. This title covers the first four decades or so of the country’s existence looking at the individual emirates, their rulers and their tribes. Rivalries occasionally became conflicts, but year by year differences have diminished and unity prevailed. In this title each annual overview gives a comprehensive picture.
E-Book (PDF)

€198.00$248.00
​
Add to Cart
Anthony Axon, M.A. (Cantab) joined The Economist in 1967 to work on a Latin American Edition. He subsequently worked for the publishing division of the Council of Europe in Strasbourg before launching World of Information in 1973 in Cambridge, UK.

Susan Hewitt first worked in publishing in 1963 in Lusaka, Northern Rhodesia (which became Zambia on independence in 1964). She worked with Gemini News Service soon after it launched in 1967 and then African Development magazine. She joined World of Information in 1974.

All interested in the recent history of the UAE, including graduate and post-graduate students, libraries, research institutes, government departments, diplomats, NGOs and businesses.