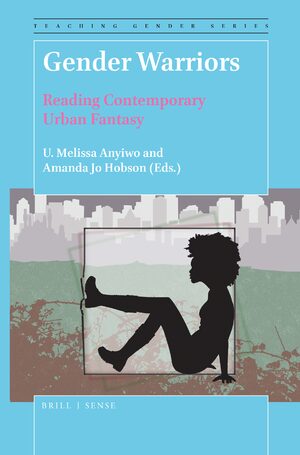 Series:  Teaching Gender, Volume: 10
Editors: U. Melissa Anyiwo and Amanda Hobson
Gender Warriors: Reading Contemporary Urban Fantasy offers classroom-ready original essays outlining contemporary debates about sexual objectification and gender norms in urban fantasy and examining how those cultural categories are reinforced and unraveled. The essays explore the foundations and evolutions of urban fantasy and presentations of gendered identities in a wide variety of sources, focusing not only on popular examples, such as Buffy the Vampire Slayer and Underworld, but also on less studied works, for instance Penny Dreadful and Anita Blake.

The authors address the sociocultural institutions that bind gender to the body and shape our views of gendered norms, inviting students of all experience levels to engage in interdisciplinary conversations about both theoretical and embodied constructions of gender and the production of genre and generic conventions. The text unpacks cultural norms of gender and addresses issues of identity construction within an endlessly evolving genre. This collection demonstrates the way that representations of gender and the kick-ass female urban fantasy warrior have upended and reinforced a broad range of expectations and tropes, making it a fascinating text for any course, such as first-year studies, literature, film, gender studies, sociology, cultural studies, history, and more.
E-Book (PDF)

$36.00
​
Add to Cart
U. Melissa Anyiwo is a Professor and Coordinator of African American Studies at Curry College, Massachusetts. She has published multiple texts on the vampire as ethnic archetype, including Race in the Vampire Narrative (Sense Publishers, 2015).
Amanda Jo Hobson is the Assistant Dean of Students and Director of the Women’s Resource Center at Indiana State University. She has published several chapters on vampires in popular culture and is the co-editor of Gender in the Vampire Narrative (Sense Publishers, 2016).
"The theme that most resonates with me in U. Melissa Anyiwo and Amanda Hobson’s Gender Warriors: Reading Contemporary Urban Fantasy is the importance of perception. As a CJ scholar, it can be challenging to impress upon my students (many whom are active criminal justice practitioners) why perception is so vitally important. The chapters in Anyiwo and Hobson’s edited text all examine perception in some way no matter the specific lens (queer lens of Buffy and the current political climate by Guitar’s chapter or a postfeminist response to Harry Potter in fan fiction in Coker’s chapter for example). By identifying and examining the manifest and latent content that is found in all forms of communication, students can learn to deconstruct how messages are perceived and understand how perceptions shape trust and relationships. In current times, this level of critical analysis is imperative to the work of cultivating and maintaining strong community and police relationships. Understanding and appreciating the various lenses through which information is filtered (race, class, gender, among many others) and how perception drives decision-making is paramount to fostering strong, healthy, crime-resistant communities and sustainable and equitable justice." - Rebecca Allen Paynich, Professor of Criminal Justice, Curry College, and author of Law Enforcement in the United States (Jones & Bartlett Learning, 2011) and Fundamentals of Crime Mapping (Jones & Bartlett Learning, 2018)
"U. Melissa Anyiwo and Amanda Hobson’s Gender Warriors: Reading Contemporary Urban Fantasy offers provocative assessments of a wide range of popular culture texts and icons. Focusing particularly on representations of gender, sexuality, class, and race, this collection offers nuanced interpretations of the often contradictory messages and ideologies embedded within the urban fantasy genre. Anyiwo’s analysis of the Showtime series Penny Dreadful, for example, contends that the series simultaneously contests and reinforces dominant cultural representations of Otherness, and persuasively reveals how the show’s attempt to reposition canonical literary monsters as sympathetic protagonists implicitly reinscribes white male privilege and traditional axes of difference along gendered and racial lines. Thoughtfully curated and theoretically cohesive, Gender Warriors will undoubtedly serve as an invaluable resource for anyone interested in popular culture studies, intersectional feminism, and film/television studies." - Katherine Lee, Associate Professor of English and Gender Studies, Indiana State University, and contributor to the Encyclopedia of Racism in American Film (Rowman & Littlefield, 2018)
"When I teach critical theory to undergraduate students I’m often looking for ways to help them connect with material that can often be dense and abstract. Gender Warriors is a collection useful for not only teaching feminist theory, but other schools and traditions working well with everything from Virginia Woolf’s A Room of One’s Own (using Sarah Smith’s “Empowering or Fetishizing: Wonder Woman Takes the Bechdel Test”) to Roland Barthes’s “Death of the Author” (using Cait Coker’s “The Problematic Fan-Girl: Cassandra Glare’s Gendered Revisions in the Mortal Instrument Series”). Most interesting is Ana G. Gal’s “Tough Women, Patriarchal Violence, and the Problem of Non-Intersectional Feminism in Les Wiseman’s Underworld Series” which performs a deft deconstruction of the going analysis of the Underworld Series. Although often thought of as feminist, Gal shows how the series carries with it more than just a trace of the patriarchy. Many undergraduate students are familiar with one-sided social media-friendly essays on these topics and will benefit greatly from the depth and insight found in this collection. Gender Warriors forces us to question previous analyses of urban fantasy, making us reenvision what we thought we already saw clearly enough." - Jennifer Schomburg Kanke, Florida State University and editor of Pleiades Book Review
Acknowledgements

All interested in the urban fantasy genre and representations of gender in popular culture, and specifically written for undergraduate students, including with a teaching chapter.