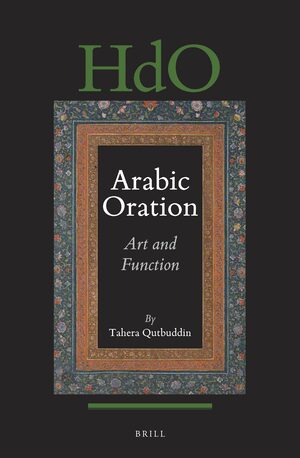 Author: Tahera Qutbuddin
In Arabic Oration: Art and Function, a narrative richly infused with illustrative texts and original translations, Tahera Qutbuddin presents a comprehensive theory of this preeminent genre in its foundational oral period, 7th-8th centuries AD. With speeches and sermons attributed to the Prophet Muḥammad, ʿAlī, other political and military leaders, and a number of prominent women, she assesses types of orations and themes, preservation and provenance, structure and style, orator-audience authority dynamics, and, with the shift from an oral to a highly literate culture, oration’s influence on the medieval chancery epistle. Probing the genre’s echoes in the contemporary Muslim world, she offers sensitive tools with which to decode speeches by mosque-imams and political leaders today.
E-Book (PDF)

€150.00$180.00
​
Add to Cart
Tahera Qutbuddin, Ph.D. (1999), Harvard, is Professor of Arabic Literature at The University of Chicago. She has published widely on Islamic preaching, Ali’s sermons, Fatimid poetry, Tayyibi Bohra literature, and Arabic in India, including Light in the Heavens: Sayings of the Prophet Muḥammad (NYU, 2016)
"This erudite study is a major breakthrough in our understanding of Arabic oratory. Qutbuddin has painstakingly reconstructed this vast tradition in all its diverse guises and contexts, from the battlefield to the pulpit, from political to legislative speeches. She presents its complexities with lucid precision and scrupulous attention to detail—and it is a truly pioneering work for Qutbuddin’s discussion of women’s orations and her survey of contemporary sermons."
James Montgomery, Sir Thomas Adams Professor of Arabic, University of Cambridge.

“For a scholar of Western traditions of political thought, this book is a revelation. The Western canon also begins with oratory and with the ideas of the relation between public speech and politics that lay at the heart of Greek practice. To come to understand how the Arabic tradition thinks of language’s role in shaping communal and political life will significantly advance the capacity of scholars to engage with the political discourse of the Arabic speaking world. This project is of fundamental importance and should transform the capacity of the non-Islamic and Islamic worlds to communicate with each other about political subjects.”
Danielle Allen, James Bryant Conant University Professor, Harvard, and Director, Edmond J. Safra Center for Ethics

“ Arabic Oration: Art and Function undertakes a comprehensive analysis of the Arabic oration, a prominent genre of Arabic literature that has roots in ancient Arab oral tradition. Tahera Qutbuddin presents a masterful survey of the genre, identifying the major sub-categories of the genre and analyzing their formal conventions, themes, rhetorical strategies, and aesthetics. Drawing on examples attributed to orators from the pre-Islamic period, key figures of the nascent Muslim community, and commanders, governors, and other prominent figures of early Islamic history, including women, she addresses the reception of orations and the important functions they served in political, social, and religious life. This ground-breaking work provides essential background for an understanding of Arabic literary history, early Islamic political history, and the history of the Arabic language.”
Devin J. Stewart, Professor of Arabic and Islamic Studies, Emory University

"Pious sermons, stirring battle speeches, chilling political rhetoric by stern governors, splendid literary artefacts: they are the subject of this magisterial book on Arabic oratory in which Tahera Qutbuddin deals with Arabic speeches as they have been recorded in the early centuries of Islam. Their stylistic and structural characteristics, their oral nature, their function, their influence even on present-day Friday sermons in Muslim countries, all this is expertly handled, as is the controversial matter of their authenticity. This book about an important but somewhat neglected genre is essential reading for all students of early Islam, its history and its literature."
Geert Jan van Gelder, Laudian Professor of Arabic Emeritus, University of Oxford

1 The Preservation of Orations
Mnemonics-Based Oral Transmission, Supplementary Writing, and the Question of Authenticity

3 Style of the Oration
The Aesthetics of Orality and Persuasion

4 Orators and Audience of the Oration
Dynamics of Public Space, Authority, and Negotiation

5 The Sermon of Pious Counsel
Human Mortality, a Life of Virtue, and Preparation for the Hereafter

6 The Friday and Eid Sermon
Ritual and Piety, Politics and War

7 The Battle Oration
Horses and Swords, Strategies and Ethics, Urgings and Prayers

8 The Political Speech
Succession and Accession, Control and Policy