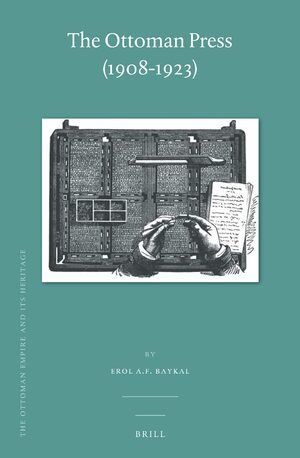 Series:  The Ottoman Empire and its Heritage, Volume: 67
Author: Erol A.F. Baykal
The Ottoman Press (1908-1923) looks at Ottoman periodicals in the period after the Second Constitutional Revolution (1908) and the formation of the Turkish Republic (1923). It analyses the increased activity in the press following the revolution, legislation that was put in place to control the press, the financial aspects of running a publication, preventive censorship and the impact that the press could have on readers. There is also a chapter on the emergence and growth of the Ottoman press from 1831 until 1908, which helps readers to contextualize the post-revolution press.
E-Book (PDF)

€115.00$138.00
​
Add to Cart
Erol A. F. Baykal, Ph.D. (2013), Cambridge University, has published articles and made contributions to the Encyclopaedia of Islam 3 on the topics related to the Ottoman press.
Preface
Acknowledgments
List of Figures
Commonly Used Abbreviations
On Transliteration and Calendars

All interested in late-Ottoman history and the history of the press in general.