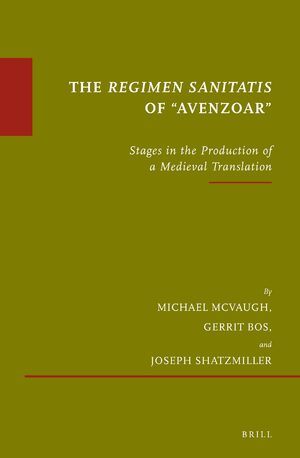 The Regimen sanitatis of “Avenzoar”

Stages in the Production of a Medieval Translation

Series:  Études sur le judaïsme médiéval, Volume: 79
Authors: Michael R. McVaugh, Gerrit Bos, and Joseph Shatzmiller
The authors publish a previously unedited Regimen of Health attributed to Avenzoar (Ibn Zuhr), translated at Montpellier in 1299 in a collaboration between a Jewish philosopher and a Christian surgeon, the former translating the original Arabic into their shared Occitan vernacular, the latter translating that into Latin. They use manuscript evidence to argue that the text was produced in two stages, first a quite literal version, then a revision improved in style and in language adapted to contemporary European medicine. Such collaborative translations are well known, but the revelation of the inner workings of the translation process in this case is exceptional. A separate Hebrew translation by the philosopher (also edited here) gives independent evidence of the lost Arabic original.
E-Book (PDF)

€138.00$166.00
​
Add to Cart
Michael McVaugh, Ph.D. 1965 (Princeton), is Wells Professor of History emeritus at the University of North Carolina. He has published widely on medieval medical learning and is general editor of the Latin medical writings of Arnau de Vilanova (Barcelona, 1975-present).
Gerrit Bos, (Ph. D. 1989) is Professor Emeritus of Jewish Studies at the University of Cologne, Germany. He is widely published in the fields of Jewish studies, Islamic studies, and medieval science and medicine in Arabic and Hebrew texts.
Joseph Shatzmiller, Ph. D. 1967 (Aix), is Professor of History emeritus at Duke University. His numerous publications on medieval Judaica include Shylock Revisited (California, 1990), and most recently Cultural Exchange: Jews, Christians, and Art in the Medieval Marketplace (Princeton, 2013).
Preface

Students of the Hebrew, Arabic, and Latin medical literature of the Middle Ages; scholars interested in medieval medical teaching and in the transmission of scientific knowledge in premodern times.