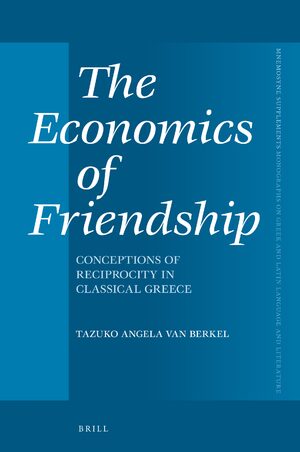 The Economics of Friendship

Conceptions of Reciprocity in Classical Greece

Author: Tazuko van Berkel
In The Economics of Friendship, Tazuko Angela van Berkel offers an account of the notion of reciprocity in 5th- and 4th-century Greek incepting social theory. The preoccupation with the norms of philia and charis, conspicuous in sources from the Classical Period, is a symptom of changes in the shape of ancient economic activities: the ubiquitous norm that one should reciprocate benefit with benefit becomes a source of conceptual confusion in the Classical Period, where other forms of exchange become conceptually available. This confusion and tension between different models of mutuality, is productive: it is the impetus for folk theory in comedy, tragedy and oratory, as well as philosophical reflection (Xenophon, Plato, Aristotle) on what it is that binds people together.
E-Book

€125.00$151.00
​
Add to Cart
Tazuko Angela van Berkel is Assistant Professor of Ancient Greek Language and Literature at Leiden University. Her 2012 Leiden dissertation was awarded the Legatum Stolpianum. She has published on Protagoras, Xenophon, ancient economic reflection, and the rhetoric of numbers.
1 Introduction: The Economics of Friendship
1  Friendship: Money Can’t Buy It?
2  Φιλια
3  An Economic Mentality
4  Apparatus and Argument

2 Grace under Pressure: The Anatomy of χάρις
The Argument
1  Three Cases of Isomorphism
2  χάρις and Successful Interaction
3  Perception and méconnaissance
4  Conflicts and Cynicism
5  Concluding Remarks

6 Active Partnership: Socrates and the Art of Seduction
The Argument
1  Amazing Grace: Looking as a Reciprocal Endeavour
2  The Hunter Hunted: Role Reversals and the Paradox of the Hetaera
3  Desire Management
4  The Secrets of Love Magic
5  The Socratic Principle: Pay It Forward
6  Concluding Remarks: Language Games at the Market Frontier

All who are interested in friendship and forms of relationality in the classical world, and anyone concerned with ancient Greek economic reflection and intellectual history.