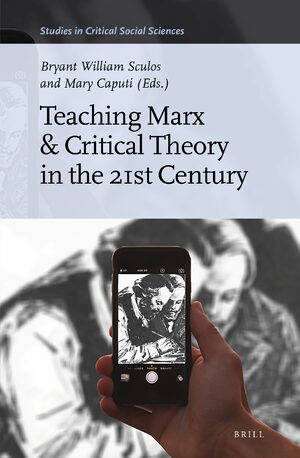 Series:  Studies in Critical Social Sciences, Volume: 140
Editors: Bryant William Sculos and Mary Caputi
In response to this current political and economic climate, Teaching Marx & Critical Theory in the 21st Century defends the importance, and difficulties, of teaching Marx and critical theory—and the crucial insights of critical pedagogy—through variously original and republished chapters, which, each in their own ways, reflect on ways to teach and reach twenty-first century students. This volume presents unique perspectives on teaching Marx and critical theory in various contexts, sub-fields, and geographies, and underscores the need for students of the modern world to be versed in Marxist thought and for pedagogues to push the limits of critical pedagogical strategies in the classroom—and beyond.

$163.00
​
Add to Cart
Bryant William Sculos, Ph.D. (2017), is Visiting Assistant Professor of global politics and political theory at Worcester State University. He was a 2019 Fellow at the Institute for Critical Social Inquiry at The New School for Social Research and a Mellon-Sawyer Postdoctoral Fellow at the University of Massachusetts Amherst (2018-2019). He is a regular contributor to The Hampton Institute and Class, Race and Corporate Power -- where he also serves as Politics of Culture section editor. Sculos's transdisciplinary research and teaching expertise includes: modern and contemporary political theory, global politics, critical/radical pedagogy, and critical political economy.

Mary Caputi, Ph.D., teaches political theory at California State University, Long Beach. She publishes in the areas of feminism, critical theory, postcolonialism, and psychoanalysis. Her books include Feminism and Power: the Need For Critical Theory (Lexington, 2013), Derrida and the Future of the Liberal Arts, co-edited with Vincent Del Casino (Bloomsbury, 2013), A Kinder, Gentler America: Melancholia and the Mythical 1950s (University of Minnesota Press, 2005), and Voluptuous Yearnings: A Feminist Theory of the Obscene (Rowman & Littlefield, 1994). She is currently at work on the topic of Slow Food, USA.


1 The Specter That Haunts Political Science: the Neglect and Misreading of Marx in International Relations and Comparative Politics
Sebastián Sclofskyand Kevin Funk
2 Marxism and ipe
Ronald W. Cox
3 Marx in Miami: Reflections on Teaching and the Confrontation with Ideology
Bryant William Sculos and Sean Noah Walsh
4 Marxferatu: Introducing Marx through the Vampire Metaphor
Jess Morrissette
5 Neoliberal Feminist Monsters: Where to Find Them and How to Slay Them
Maylin M. Hernandez

The primary readership for the manuscript is academics and students of politics open to a critique of the reigning neoliberal paradigm and capitalism more generally. The essays contained in the collection are suitable for upper-division undergraduate courses, graduate courses, and scholars and teachers of contemporary politics.