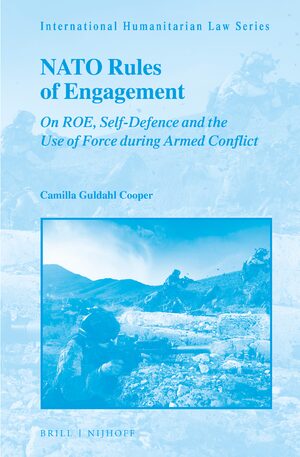 On ROE, Self-Defence and the Use of Force during Armed Conflict

Author: Camilla Guldahl Cooper
In NATO Rules of Engagement, Camilla Guldahl Cooper offers clarity on a topic prone to confusion and misunderstanding. NATO rules of engagement (ROE) are of considerable political, strategic and operational importance, yet many of its concepts lack clarity. The resulting ambiguity may be detrimental for people involved and for mission accomplishment.

Through a thorough analysis of the concept, purpose, development and use of NATO ROE, Cooper contributes to improved understanding and implementation of NATO ROE. The book covers all use of force categories and relevant law relating to the use of force during armed conflicts, including the complex concepts of hostile act and hostile intent, direct participation in hostilities, and the increasing reliance on self-defence during armed conflict.
E-Book (PDF)

€180.00$216.00
​
Add to Cart
Camilla Guldahl Cooper, Ph.D. (Oslo, 2018), Norwegian Defence University College, is an Associate Professor of operational law. She has co-authored the Norwegian Manual of the Law of Armed Conflict, and published articles and chapters on operational law.
Acknowledgements
List of Abbreviations