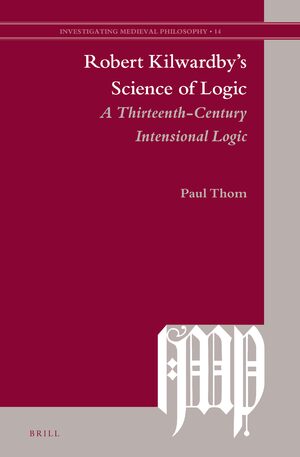 Author: Paul Thom
Paul Thom’s book presents Kilwardby’s science of logic as a body of demonstrative knowledge about inferences and their validity, about the semantics of non-modal and modal propositions, and about the logic of genus and species. This science is thoroughly intensional. It grounds the logic of inference on that in virtue of which the inference holds. It bases the truth conditions of propositions on relations between conceptual entities. It explains the logic of genus and species through the notion of essence.
Thom interprets this science as a formal logic of intensions with its own proof theory and semantics. This comprehensive reconstruction of Kilwardby’s logic shows the medieval master to be one of the most interesting logicians of the thirteenth century.
E-Book (PDF)

€121.00$146.00
​
Add to Cart
Paul Thom, B.Phil. (Oxford), is Honorary Professor of Philosophy at the University of Sydney and a Fellow of the Australian Academy of Humanities. He has authored numerous books on the history of logic.
"Robert Kilwardby (d. 1279) was almost always of interest to medieval philosophers. This interest, however, has seldom been replicated by modern editorial initiatives, leaving our appreciation of the Oxford master’s intellectual profile incomplete, and perhaps uneven. We are aware of the different contributions that Kilwardby made to metaphysics and to the natural philosophy of his time, and we know that he was a dedicated and influential logician. We may even claim that Kilwardby was a fortunate logician, for he was one of the first scholars in the Latin West to read and to comment on the newly discovered books of Aristotle’s logic. This feature is greatly stressed in Paul Thom’s second book devoted exclusively to Kilwardby’s "science of logic", as described in the title.[...] Thom’s volume already stands as a great and inspiring work for the almost timeless interpretative potential he fairly attributes to Robert Kilwardby’s logic." Edit Anna Lukacs, in Speculum 96/1 , (January 2021).