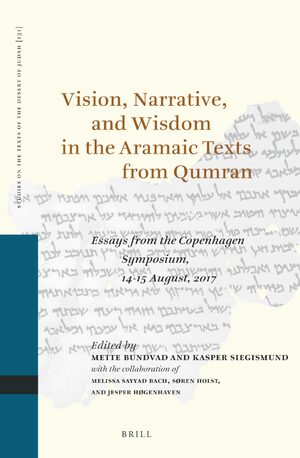 Editors: Mette Bundvad and Kasper Siegismund
The Aramaic Dead Sea Scrolls from Qumran have attracted increasing interest in recent years. These texts predate the “sectarian” Dead Sea scrolls, and they are contemporary with the youngest parts of the Hebrew Bible. They offer a unique glimpse into the situation before the biblical canons were closed. Their highly creative Jewish authors reshaped and rewrote biblical traditions to cope with the concerns of their own time. The essays in this volume examine this fascinating ancient literature from a variety of different perspectives. The book grew out of an international symposium held at the University of Copenhagen in August 2017.
E-Book

Remembering the Past, Cultivating a Character: Memory and the Formation of Daniel in the Aramaic Pseudo-Daniel Texts (4Q243–244; 4Q245)
Andrew B. Perrin

The Banquet Culture in New Jerusalem, an Aramaic Text from Qumran
Hugo Antonissen

Between Aaron and Moses in 4QVisions of Amram
Liora Goldman

Geography in the Visions of Amram Texts (4Q543–547)
Jesper Høgenhaven

Fragments and Forefathers: An Experiment with the Reconstruction of 4QVisions of Amram
Søren Holst

The Compositional Setting and Implied Audience of Some Aramaic Texts from Qumran: A Working Hypothesis
Daniel A. Machiela

Aramaic Traditions from the Qumran Caves and the Palestinian Sources for Part of Luke’s Special Material
George J. Brooke

Index
Anyone interested in the Bible, ancient Judaism, the Dead Sea Scrolls, biblical interpretation, and the history of religion.