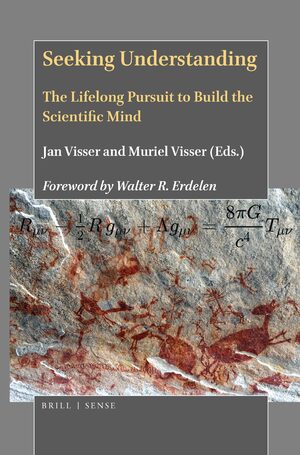 The Lifelong Pursuit to Build the Scientific Mind

Editors: Jan Visser and Muriel Visser
The quest to understand defines our humanness. Since time immemorial it has given rise to art and literature, philosophical reflection, religious practice, myths, metaphor, and allegory, as well as, in more recent history, disciplined scientific inquiry. Seeking understanding is a lifelong journey towards a goal the parameters of which change as our pursuit progresses, until, at life’s end, the goal vanishes beyond the horizon. Such is humanness. Along the way, we build, in an enduring self-transformative fashion, our mind—the scientific mind. But what is that mind?

A transdisciplinary team of 21 prominent authors, from areas such as music history, psychiatry, physics, cosmology, education, astronomy, mathematics, medicine, gaming, artificial intelligence, science communication, early child development, science education, and economics, shed light on what it takes humans to build and cultivate the scientific mind along the lifespan. A decade of intercultural dialogue preceded the book. It comprised six major international Building the Scientific Mind colloquia in culturally diverse settings that spanned the entire planet. Several hundred people from different disciplines and interests—among them distinguished scientists, policy and decision makers, practitioners and thinkers—contributed to the dialogue.

Building the scientific mind transforms our ‘way of being in the world.’ It is driven by the desire to understand deeply—cognitively and affectively—who we are in a world of which we are an integral part. It has great relevance for sustained human existence in the Anthropocene and profound implications for how we organize the conditions for informal and formal learning.
E-Book (PDF)

€50.00$60.00
​
Add to Cart
Jan Visser, Engineering Degree (1965), Delft University of Technology; PhD (1989), Florida State University. Jan is Theoretical Physicist and multiply awarded Cognitive Scientist. He is founding President & Senior Researcher at the Learning Development Institute and a former UNESCO Director. Jan publishes prolifically across disciplines in multiple languages.
Muriel Visser, PhD (2004), Florida State University, International Development Specialist. Muriel is an independent consultant, specialized in humanitarian and development aid evaluations. She works for international agencies around the world and is an associate researcher with the Learning Development Institute.
Foreword
Walter R. Erdelen
Acknowledgements
List of Figures and Tables
Notes on Contributors
Introduction: The Making of This Book and Its Roots in Creative Collaboration
Jan Visser and Muriel Visser
Intermezzi: Thoughts Inspired by the Thoughts of Others
Jan Visser

1 The Quest to Know: Seeking Understanding and Wisdom
Jan Visser
Intermezzo 1: The Missing Piece
Jan Visser
2 Context Is Everything and Everything Has Meaning
Robert Greenberg
Intermezzo 2: Life Starts Long before Its Beginning
Jan Visser
3 From Preconception to Preschool: The Foundation of the Scientific Mind
Emily Vargas-Barón
Intermezzo 3: Touching the Encountered World
Jan Visser
4 Saga of a Small Science Center
Arvind Gupta
Intermezzo 4: The Worthwhile Struggle to Overcome Inertia
Jan Visser
5 Expanding the Dialogue: Challenging the Mental Models of Schooling through Indigenous Invention
Paul E. Heckman
Intermezzo 5: When the Sky Is Not the Limit, It Could Be the Beginning
Jan Visser
6 The Inspiring Universe
George Miley, Carolina Ödman and Pedro Russo
Intermezzo 6: Never Ever without Passion
Jan Visser
7 Playing the Role of Facilitator: Questioning the Curious Mind
Jos van den Broek
Intermezzo 7: On Dialogue
Jan Visser
8 How You Talk Is How You Think; How You Think Is How You Understand
Paul Webb
Intermezzo 8: Facing Life’s Biggest Questions
Jan Visser
9 Seeking to Know and Understand the Self
Premana W. Premadi
Intermezzo 9: A Sense of Beauty
Jan Visser
10 Beauty in Science, Science in Beauty: The Scientific Aesthetic as an Evolving Heuristic
Matthew Colless
Intermezzo 10: Making the Unfamiliar Familiar
Jan Visser
11 Science Popularizer Is the Most Important Job That Does Not Yet Exist: Why Modern Societies Need More Science Popularizers
Lê Nguyên Hoang
Intermezzo 11: It’s Not Just a Right; It’s an Obligation to the Future
Jan Visser
12 Fostering Inquiry, Reasoning and Critical Thinking
J. Michael Spector
Intermezzo 12: How Long Can We Still Wait and Who Takes Responsibility?
Jan Visser
13 The Shifting Mind of Economics
Martinus Petrus de Wit
Intermezzo 13: Looking Back with a View to Looking Forward
Jan Visser
14 Invent the Future
Federico Mayor
Intermezzo 14: Culture of Differences vs. Difference of Cultures
Jan Visser
15 Seeking to Find out Why Things Happen: Variations on a Theme of Diallo Sampa’s Grandfather
Ralf Syring
Intermezzo 15: Reverence for Life, Whatever Its Manifestations
Jan Visser
16 Nontraditional Pathways to the Development of a Scientific Mind: Examples from the Domain of Psychopathology
Stephen P. Hinshaw
Intermezzo 16: Homo Ludens
Jan Visser
17 Education in a Complex World: Nurturing Chaordic Agency through Game Design
Carlo Fabricatore and Ximena López
Intermezzo 17: Where Science Ends
Jan Visser
18 HIV, Medical Science and the Call to Greater Humanness
James Lees

Everyone interested in the history of humanity and its future throughout the Anthropocene, as conditioned by building the (scientific) mind across disciplines and domains of endeavor in arts and science.