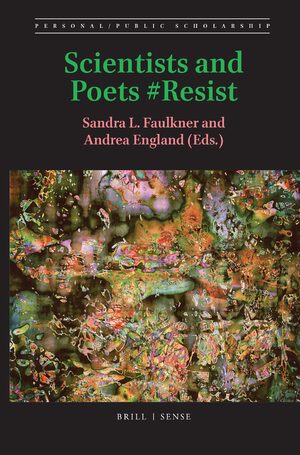 Series:  Personal/Public Scholarship, Volume: 5
Editors: Sandra L. Faulkner and Andrea England
Scientists and Poets #Resist is a collection of creative nonfiction, personal narrative, and poetry. This volume is a conversation between poets and scientists and a dialogue between art and science. The authors are poets, scientists, and poet-scientists who use the seven words—"vulnerable," "entitlement," "diversity," "transgender," "fetus," "evidence-based" and "science-based"—banned by the Trump administration in official Health and Human Service documents in December 2017 in their contributions. The contributors use the seven words to discuss their work, reactions to their work, and the creative environment in which they work. The resulting collection is an act of resistance, a political commentary, a conversation between scientists and poets, and a dialogue of collective voices using banned words as a rallying cry— Scientists and Poets #Resist—a warning that censorship is an issue connecting us all, an issue requiring a collective aesthetic response. This book can be read for pleasure, is a great choice for book clubs, and can be used as a springboard for reflection and discussion in a range of courses in the social sciences, education, and creative writing.
E-Book (PDF)

€18.00$20.00
​
Add to Cart
Sandra L. Faulkner, Ph.D. (1999), The Pennsylvania State University, is Professor of Communication at Bowling State University. She has authored or co-authored over 70 books, articles, and chapters, including Poetic Inquiry: Craft, Method, and Practice (Routledge, 2019).
Andrea England, Ph.D., Western Michigan University, is Adjunct Professor of English at that university. Her work has appeared in Midwestern Gothic, Sonora Review, and elsewhere, including the chapbooks Other Geographies (Creative Justice Press, 2017) and Inventory of a Field (Finishing Line Press, 2014).
Acknowledgements
Science-Based Vulnerability


1. It Begins with Our Words
Daniela Elza
2. Rescue the Words
Norma Wilson
3. Evidence-Based
Jane Piirto
4. Notes from Indiana: The Crossroads of America, 2018
Charnell Peters
5. Late Term
Jessica Smartt Gullion
6. Before Roe vs. Wade
Sarah Brown Weitzman
7. The Double Helix Is Not Two-Faced, It Is an Embrace
Elizabyth A. Hiscox
8. That Light Bill
Samantha Schaefer


9. Kidnapping Children and Calves (of a Tender Age)
Lee Beavington
10. What Does Transgender Look Like?
Shalen Lowell
11. Woman with PCOS Lingers on the Possibilities of Science
Minadora Macheret
12. Half a Schroedinger
Karen L. Frank
13. Bubbles
Kris Harrington
14. The Ease and Difficulty of Hating and Loving One’s Self
Franklin K. R. Cline
15. Seven Thoughts about Butterflies
Ben Paulus
16. It Takes a Village
Michelle Bonczek Evory
17. The Capital of Failure
Scott M. Bade

Questions and Activities for Further Discussion
Notes on Contributors

Students, teachers, scientists, poets, academic and public libraries, and the general public interested in literary art as resistance to oppression and censorship, and the connection between science and art, and in particular, poetry.