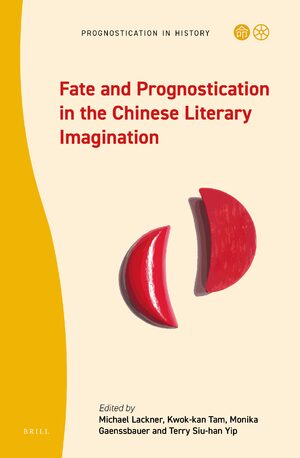 Fate and Prognostication in the Chinese Literary Imagination

Editors: Michael Lackner, Kwok-kan Tam, Monika Gänssbauer and Terry Siu Han Yip
The essays collected in Fate and Prognostication in the Chinese Literary Imagination deal with the philosophical, psychological, gender and cultural issues in the Chinese conception of fate as represented in literary texts and films, with a focus placed on human efforts to solve the riddles of fate prediction. Viewed in this light, the collected essays unfold a meandering landscape of the popular imaginary in Chinese beliefs and customs.
The chapters in this book represent concerted efforts in research originated from a project conducted at the International Consortium for Research in the Humanities at the Friedrich-Alexander-University Erlangen-Nuremberg, Germany.

€99.00$119.00
​
Add to Cart
Michael Lackner is Chair Professor of Chinese Studies at the University of Erlangen-Nuremberg and Director of the International Research Consortium in the Humanities. He is editor of the book series Prognostication in History (Brill). He is a historian-philosopher and an international authority in the study of fate and prognostication.
Kwok-kan Tam is Chair Professor of English and Dean of Humanities and Social Science at the Hang Seng University of Hong Kong. He has held senior positions as Professor and Dean at other universities in Hong Kong. He is formerly Head and currently Member of the International Ibsen Committee, University of Oslo. His research covers Ibsen studies, Gao Xingjian studies, World Englishes, Chinese film, drama, and gender and literature.
Monika Gaenssbauer is Associate Professor of Chinese Studies at Stockholm University. From 2009–2015 she served as Deputy Chair of Chinese Studies at the University of Erlangen-Nuremberg. Her main research areas are Chinese contemporary literature and translation studies.
Terry Siu-han Yip is Professor in the Department of English Language and Literature at Hong Kong Baptist University. She served as Chair of the Department of English in 1995–2008. Her research interests range from European Romanticism and British Modernism to modern Chinese literature, Chinese-European literary relations and gender studies.

All interested in Fate and Prognostication in Chinese literature and film, libraries, specialists, students.