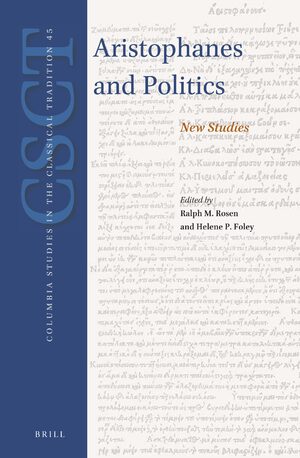 Editors: Ralph M. Rosen and Helene P. Foley
The essays in this volume explore the many aspects of the “political” in the plays of Greek comic dramatist Aristophanes (5th century BCE), posing a variety of questions and approaching them through diverse methodological lenses. They demonstrate that “politics” as reflected in Aristophanes’ plays remains a fertile, and even urgent, area of inquiry, as political developments in our own time distinctly color the ways in which we articulate questions about classical Athens. As this volume shows, the earlier scholarship on politics in (or “and”) Aristophanes, which tended to focus on determining Aristophanes’ “actual” political views, has by now given way to approaches far more sensitive to how comic literary texts work and more attentive to the complexities of Athenian political structures and social dynamics. All the studies in this volume grapple to varying degrees with such methodological tensions, and show, that the richer and more diverse our political readings of Aristophanes can become, the less stable and consistent, as befits a comic work, they appear to be.
E-Book (PDF)

€112.00$135.00
​
Add to Cart
Ralph M. Rosen, Ph.D. (1983), Harvard University, is Vartan Gregorian Professor of the Humanities and Classical Studies at the University of Pennsylvania. He has published broadly on Greek and Roman literature and culture, with a focus on ancient comedy and satire, comparative poetics, Greek intellectual history and ancient medicine.
Helene P. Foley, Ph.D. (1975), Harvard University, Claire Tow Professor of Classics at Barnard College, Columbia University has published books and articles on Greek epic and drama, on women and gender in Antiquity, and on modern performance and adaptation of Greek drama.

2 Politics and Laughter: the Case of Aristophanes’ Knights
Robin Osborne

4 Conservative and Radical: Aristophanic Comedy and Populist Debate in Democratic Athens
I. A. Ruffell

6 Politics in the Street: Some Citizen Encounters in Aristophanes
Stephen Halliwell

7 The Politics of Diversity: a Quantitative Analysis of Aristophanes
Carina de Klerk

10 The Politics of Dissensus in Aristophanes’ Birds
Mario Telò

11 Inscribing Athenians: the Alphabetic Chorus in Aristophanes’ Babylonians and the Politics and Aesthetics of Inscription and Conscription in Fifth-Century Athens
Deborah Steiner

12 Afterword: the Boy from Cydathenaeum Some Concluding Reflections
Paul Cartledge