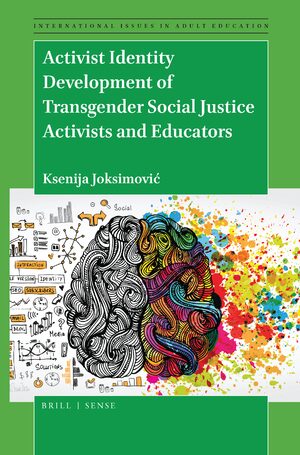 Author: Ksenija Joksimović
Activist Identity Development of Transgender Social Justice Activists and Educators introduces an anti-oppressive, critical and intersectional approach to social justice activism and education, and adult education for social change. This book examines how state governments, laws, policies, institutions, and systems of dominant hegemonic ideologies, such as education systems, the legal systems, and their gatekeepers influence the social position and epistemic agency of transgender and gender non-conforming people (TGNC), therefore shaping their social justice activist and educator identity development. The research was conducted with eight TGNC social justice activists and educators from eight different countries, who were at the time in leadership positions in organizations working on the advancement of LGBTQI human rights.

This volume seeks not only to understand and interpret power structures, power relations and inequalities in society which determine social positionality of trans activists and influence the formation and development of their activist identity, but also to challenge them by raising critical consciousness, questioning dominant cultural, political, and social domains which determine knowledge production. It advocates for a trans-affirming, intersectional approach to educational provision, theory, and research.
E-Book

€35.00$42.00
​
Add to Cart
Ksenija Joksimović is a social justice activist and educator working in the field of critical, anti-oppressive education for social transformation. They hold a B.A. in Adult Education, a Master’s degree in Adult Education for Social Change, a postgraduate certificate in Counseling, and are currently conducting their Ph.D. research on resilience of transgender and gender non-conforming social justice educators, at the Department of Human Sciences of the University of Verona, Italy.
Acknowledgments

Social justice educators, activists, education researchers, especially in the field of anti-oppressive education; educators working in formal education settings, academics and anyone who is interested to learn more on the subject.