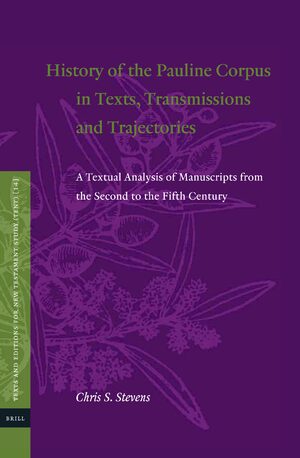 History of the Pauline Corpus in Texts, Transmissions and Trajectories

Series:  Texts and Editions for New Testament Study, Volume: 14
Author: Chris S. Stevens
In History of the Pauline Corpus in Texts, Transmissions, and Trajectories , Chris S. Stevens examines the Greek manuscripts of the Pauline texts from P46 to Claromontanus. Previous research is often hindered by the lack of a systematic analysis and an indelicate linguistic methodology. This book offers an entirely new analysis of the early life of the Pauline corpus. Departing from traditional approaches, this text-critical work is the first to use Systemic Functional Linguistics, which enables both the comparison and ranking of textual differences across multiple manuscripts. Furthermore, the analysis is synchronically oriented, so it is non-evaluative. The results indicate a highly uniform textual transmission during the early centuries. The systematic analysis challenges previous research regarding text types, Christological scribal alterations, and textual trajectories.
E-Book (PDF)

3 Method for Direct Evaluation of Textual Uniformity
1  Comparative Methods
2  Definition of a Unit of Variation
3  New Method of Textual Comparison
4  Procedure for the Comparison of Manuscripts: Counting and Numerical Majority

8 Source and History of the Pauline Corpus
1  Before AD 200
2  Historical Consistency Rather Than Diversity Followed by Recension
3  When Does the Pauline Corpus Originate? Theories of Publication
4  Conclusion

All interested in the early history of the Pauline corpus regarding its early circulation and transmissional stability versus fluidity.